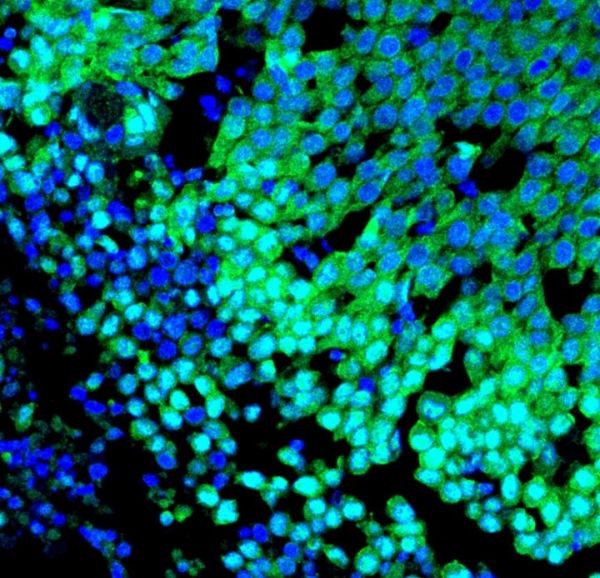 Breast cancer is the most common type of tumour found in women. 69,000 new cases are diagnosed each year in Germany alone.

Breast cancer is the most common type of tumour found in women. 69,000 new cases are diagnosed each year in Germany alone. Around 80 percent of tumours originate in the luminal cells, the milk-producing cells of the mammary gland. 10 percent of the cells resemble those of the underlying (basal) cell layer. These are muscle-like epithelial cells that contract when the mammary gland produces milk in order to push it out.

“While luminal breast tumours are usually sensitive to hormones, 80 percent of basal-like tumours are triple-negative. They have no receptors for estrogen (ER), progesterone (PR) or the growth factor receptor HER2”, says Professor Walter Birchmeier. He heads the Signal Transduction in Development and Cancer Lab at the Max Delbrück Center for Molecular Medicine in the Helmholtz Association (MDC). As there are currently no targeted treatments for this very aggressive form of cancer, the prognosis for affected patients is poor. These tumours rarely respond to conventional chemotherapeutic agents, which are intended to inhibit cell division.

In previous studies, Birchmeier’s team was able to demonstrate that the Wnt/b-catenin pathway plays a key role in the development of basal-like breast cancer. This signalling cascade normally regulates cell proliferation and differentiation during embryonic development. Wnt is essential for the b-catenin protein to signal to the nucleus. Once the cells are mature and ‘the job has been done’, this reaction chain is disabled and b-catenin is degraded. However, the signalling pathway can be reactivated in some types of cancer. In the case of basal-like breast cancer, it is activated and b-catenin accumulates in the tumour cells. It was also known that the YAP oncogene is upregulated in cancer stem cells. The YAP protein stimulates cell growth and is also active in the nucleus.