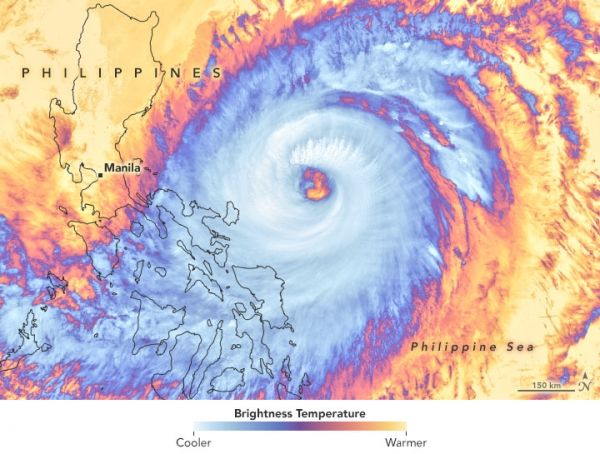 The super typhoon reached extreme intensity earlier in the year than any storm in the satellite era.

Surigae is not expected to make landfall, but the typhoon churning in the Western Pacific Ocean is already a significant storm. When the storm rapidly intensified to category 5 strength on April 17, 2021, it marked the earliest date in the year that any storm in the Northern Hemisphere had reached such intensity in modern record-keeping.

Surigae (known as Bising in the Philippines) is the first typhoon of the 2021 season in the northwest Pacific and the second named storm. According to the U.S. Joint Typhoon Warning Center (JTWC), the super typhoon reached sustained winds of 165 knots (190 miles/305 kilometers per hour) in the early afternoon on April 17. According to the Japan Meteorological Agency, the central pressure inside the storm dropped to 895 millibars, one of the lowest readings ever recorded.

The infrared satellite image above was acquired around midday on April 19 with the Visible Infrared Imaging Radiometer Suite (VIIRS) on NOAA-20. Surigae’s clouds are shown using brightness temperature data, which is useful for distinguishing cooler cloud structures from the warmer surface below. Around that time the JTWC reported the typhoon had sustained winds of 120 knots (140 miles/220 kilometers per hour).