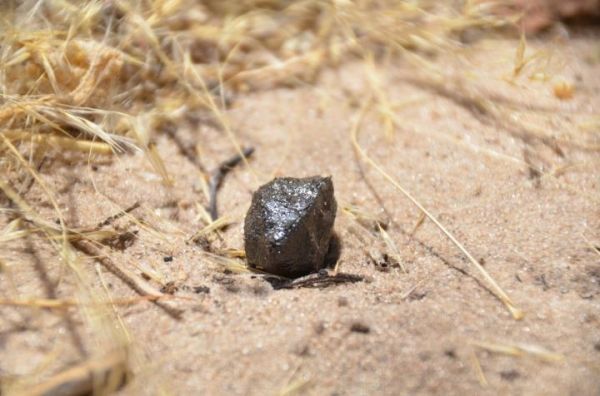 An international team of researchers searched for pieces of a small asteroid tracked in space and then observed to impact Botswana on June 2, 2018.

An international team of researchers searched for pieces of a small asteroid tracked in space and then observed to impact Botswana on June 2, 2018. Guided by SETI Institute meteor astronomer Peter Jenniskens,  they found 23 meteorites deep inside the Central Kalahari Game Reserve and now have published their findings online in the journal Meteoritics and Planetary Science.

"Combining the observations of the small asteroid in space with information gleaned from the meteorites shows it likely came from Vesta, second largest asteroid in our Solar System and target of NASA's DAWN mission," said Jenniskens. "Billions of years ago, two giant impacts on Vesta created a family of larger, more dangerous asteroids. The newly recovered meteorites gave us a clue on when those impacts might have happened."

The small asteroid that impacted Botswana, called 2018 LA, was first spotted by the University of Arizona's Catalina Sky Survey as a faint point of light moving among the stars. The Catalina Sky Survey searches for Earth-crossing asteroids as part of NASA's Planetary Defense program.

"Small meter-sized asteroids are no danger to us, but they hone our skills in detecting approaching asteroids," said Eric Christensen, director of the Catalina Sky Survey program.