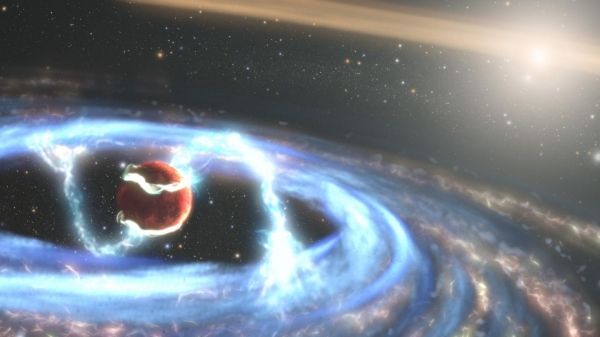 NASA’s Hubble Space Telescope is giving astronomers a rare look at a Jupiter-sized, still-forming planet that is feeding off material surrounding a young star.

NASA’s Hubble Space Telescope is giving astronomers a rare look at a Jupiter-sized, still-forming planet that is feeding off material surrounding a young star.

“We just don’t know very much about how giant planets grow,” said Brendan Bowler of the University of Texas at Austin. “This planetary system gives us the first opportunity to witness material falling onto a planet. Our results open up a new area for this research.”

Though over 4,000 exoplanets have been cataloged so far, only about 15 have been directly imaged to date by telescopes. And the planets are so far away and small, they are simply dots in the best photos. The team’s fresh technique for using Hubble to directly image this planet paves a new route for further exoplanet research, especially during a planet’s formative years.

This illustration of the newly forming exoplanet PDS 70b shows how material may be falling onto the giant world as it builds up mass. By employing Hubble's ultraviolet light (UV) sensitivity, researchers got a unique look at radiation from extremely hot gas falling onto the planet, allowing them to directly measure the planet's mass growth rate for the first time. The planet PDS 70b is encircled by its own gas-and-dust disk that's siphoning material from the vastly larger circumstellar disk in this solar system. The researchers hypothesize that magnetic field lines extend from its circumplanetary disk down to the exoplanet's atmosphere and are funneling material onto the planet's surface. The illustration shows one possible magnetospheric accretion configuration, but the magnetic field's detailed geometry requires future work to probe. The remote world has already bulked up to five times the mass of Jupiter over a period of about five million years, but is anticipated to be in the tail end of its formation process. PDS 70b orbits the orange dwarf star PDS 70 approximately 370 light-years from Earth in the constellation Centaurus. (Photo Credit: NASA, ESA, STScI, Joseph Olmsted (STScI))