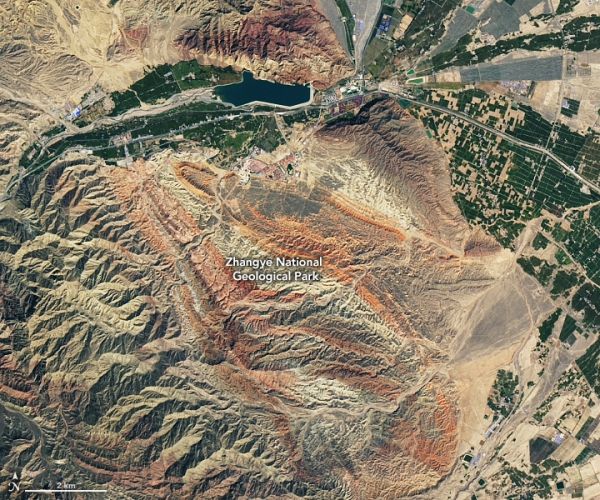 The landscape of the Quilian Mountains exhibits layer upon layer of spectacularly colorful rocks.

In northwestern China’s Gansu province, at the northernmost extent of the Tibetan Plateau, the landscape offers layer upon layer of spectacularly colorful rocks. The formations have a compelling geological history that dates back tens of millions of years and involves a continental collision more than 2,000 kilometers away.

The colorful landscape around the Qilian Mountains (Qilian Shan) is visible in these images, acquired on September 17, 2020, by the Operational Land Imager (OLI) on the Landsat 8 satellite. The reds and browns of exposed sandstones and other sedimentary rocks poke out from the range’s northern foothills, where the mountains meet a flat basin to the north known as the Hexi Corridor.

The first image shows Zhangye National Geological Park, which spans 322 square kilometers (124 square miles) of the prefecture of Zhangye. The widespread rusty color is sandstone, which was colored deep red during its formation by iron oxide. Other oxides imparted browns, yellows, and even greens to the various layers of rocks.