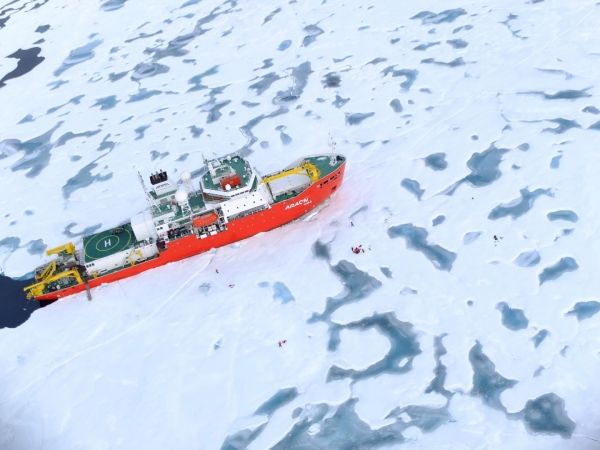 In August 2016 a massive storm on par with a Category 2 hurricane churned in the Arctic Ocean.

In August 2016 a massive storm on par with a Category 2 hurricane churned in the Arctic Ocean. The cyclone led to the third-lowest sea ice extent ever recorded. But what made the Great Arctic Cyclone of 2016 particularly appealing to scientists was the proximity of the Korean icebreaker Araon.

For the first time ever, scientists were able to see exactly what happens to the ocean and sea ice when a cyclone hits. University of Alaska Fairbanks researchers and their international colleagues recently published a new study showing that sea ice declined 5.7 times faster than normal during the storm. They were also able to prove that the rapid decline was driven by cyclone-triggered processes within the ocean.

There was general speculation that sea ice declined solely from atmospheric processes melting ice from above. Zhang and his team proved this theory incomplete using “in-situ” observations from directly inside the cyclone. The measurements reflected things like air and ocean temperature, radiation, wind and ocean currents.

Image: The Korean icebreaker Araon, which unexpectedly found itself in an Arctic cyclone in 2016, unlocked the key to how these storms wreak havoc on sea ice in the Arctic Ocean. (Credit: Photo by Joo-Hong Kim, Korea Polar Research Institute)