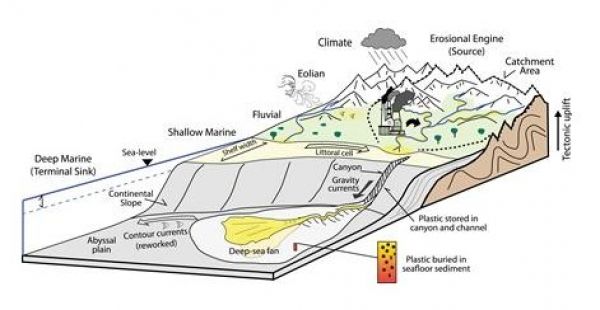 A new focus article in the May issue of Geology summarizes research on plastic waste in marine and sedimentary environments.

A new focus article in the May issue of Geology summarizes research on plastic waste in marine and sedimentary environments. Authors I.A. Kane of the Univ. of Manchester and A. Fildani of the Deep Time Institute write that “Environmental pollution caused by uncontrolled human activity is occurring on a vast and unprecedented scale around the globe. Of the diverse forms of anthropogenic pollution, the release of plastic into nature, and particularly the oceans, is one of the most recent and visible effects.”

The authors cite multiple studies, including one in the May issue by Guangfa Zhong and Xiaotong Peng, discussed in a previous GSA press release ( https://www.geosociety.org/GSA/News/pr/2021/21-04.aspx ) when it was published online ahead of print (26 Jan. 2021). Zhong and Peng were surprised to find plastic waste in a deep-sea submarine canyon located in the northwestern South China Sea.

“Plastic is generally considered to be the dominant component of marine litter, due to its durability and the large volume produced,” write Kane and Fildani. “Nano- and microplastics are a particularly insidious form of anthropogenic pollutant: tiny fragments and fibers may be invisible to the naked eye, but they are ingested with the food and water we consume and absorbed into the flesh of organisms.”

One of their vital questions is, “If some plastics can survive for >1000 years in terrestrial environments, how long do they last in ocean trenches that are kilometers deep, dark, cold, and at high pressure? How long does it take microplastic to break down into microplastics and nanoplastics in the deep sea?”

Image: Pollutants, including plastic, reach deep-sea fans through linked sediment routing systems, as well as from outside the associated catchment(s), via near-shore and shelfal currents (i.e., littoral cells), eolian transport, surface currents, and direct input from oceanic sources such as shipping and fishing. (Credit: Credit: I.A. Kane and A. Fildani (Modified from Hessler and Fildani [2019].))