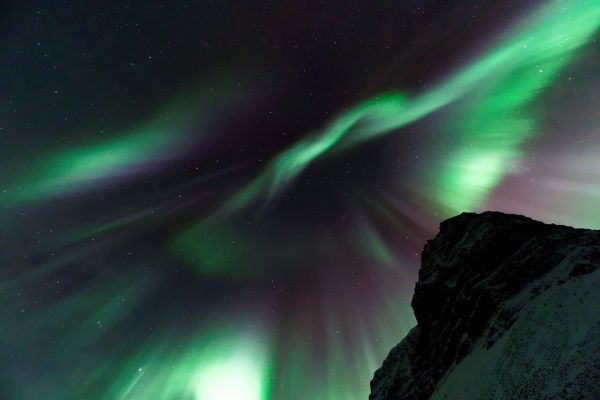 For millennia, humans in the high latitudes have been enthralled by auroras—the northern and southern lights.

For millennia, humans in the high latitudes have been enthralled by auroras—the northern and southern lights. Yet even after all that time, it appears the ethereal, dancing ribbons of light above Earth still hold some secrets.

In a new study, physicists led by the University of Iowa report a new feature to Earth’s atmospheric light show. Examining video taken nearly two decades ago, the researchers describe multiple instances where a section of the diffuse aurora—the faint, background-like glow accompanying the more vivid light commonly associated with auroras—goes dark, as if scrubbed by a giant blotter. Then, after a short period of time, the blacked-out section suddenly reappears.

The researchers say the behavior, which they call “diffuse auroral erasers,” has never been mentioned in the scientific literature. The findings appear in the Journal of Geophysical Research Space Physics.

Auroras occur when charged particles flowing from the sun—called the solar wind—interact with Earth’s protective magnetic bubble. Some of those particles escape and fall toward our planet, and the energy released during their collisions with gases in Earth’s atmosphere generate the light associated with auroras.

Read more at University of Iowa