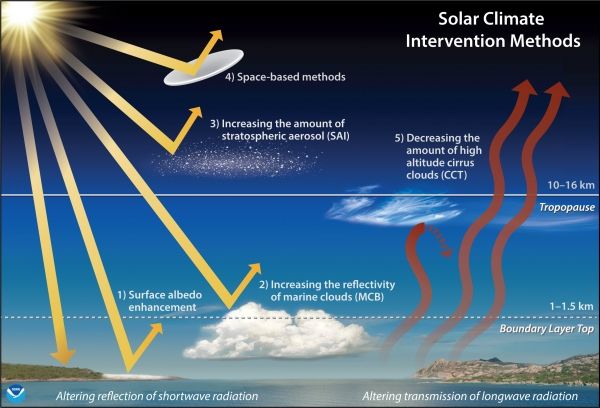 A new modeling study led by two NOAA researchers highlights the vast challenges and potentially damaging consequences of solar geoengineering actions large enough to ward off extreme warming by the end of the 21st century.

The study, published in the journal Atmospheric Chemistry and Physics, explored a set of climate model simulations generated by NCAR researchers called the Geoengineering Large Ensemble. This group of 20 simulations projected the climate-forcing influence of hypothetical sulfate aerosol injections in the stratosphere sufficient to reflect enough sunlight to counter global warming from rising carbon dioxide levels throughout the end of the 21st century.

Lead author Antara Banerjee, a CIRES research scientist working at NOAA’s Chemical Sciences Laboratory, said that the model required enormous inputs of sulfur dioxide to counter the expected warming - as much as 50 million metric tons would need to be continuously injected into the stratosphere every year by the end of the century to obtain zero global-mean temperature change even as carbon dioxide continues to increase.

“While these sulfate aerosols would largely mitigate the impacts of greenhouse gas-induced climate change, there are unintended side effects in these simulations that we need to understand,” said Banerjee.