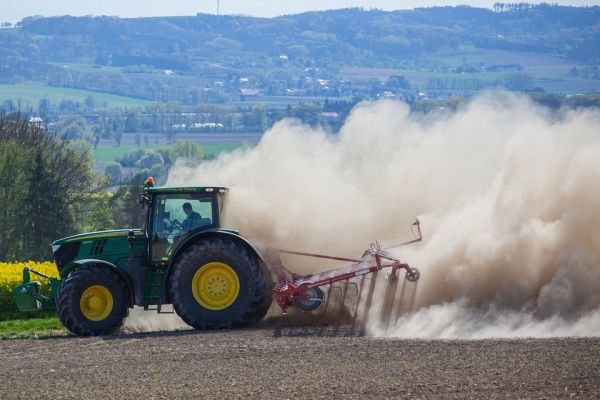 Growing up in rural Iowa in the 1990s, Isaac Larsen remembers a unique herald of springtime.

Growing up in rural Iowa in the 1990s, Isaac Larsen remembers a unique herald of springtime. The snowbanks piled along roads, once white or gray, would turn black. The culprit was windblown dust, stirred from barren farm fields into the air.

Even as some of the region’s farmers have adopted more sustainable practices, the dust still flies. Not long ago, Larsen’s mother told her son about an encounter with a dust storm, saying “the soil was just blowing across the road — almost like a blizzard, but black.”

Larsen, a 42-year-old geoscientist at the University of Massachusetts-Amherst, recently published a paper on soil loss in the U.S. Corn Belt. Since farming began, Larsen and his coauthors estimate that more than one-third of the Corn Belt — nearly 30 million acres — has lost all of its nutrient- and carbon-rich topsoil. Similar processes also are taking place on the neighboring Great Plains, a sprawling region that includes Kansas, Nebraska, and the Dakotas, as well as parts of Texas, Oklahoma, Missouri, Montana, and Colorado.

Each dust storm represents a thin layer of the earth, exfoliated by the atmosphere and relocated. Over time, as countless such storms have swept across the Midwest and Great Plains, they have removed the legacy of thousands of years of plant life and death there. The most striking example was the 1930s Dust Bowl, the environmental and agricultural catastrophe that stripped topsoil from millions of acres across the American interior, plunging farmers into bankruptcy, destroying crops, and fundamentally reshaping the heartland.