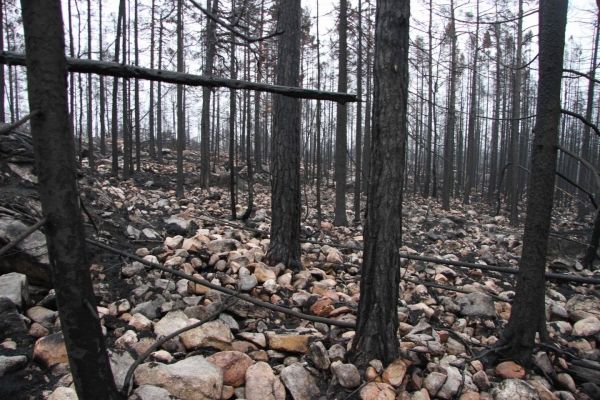 Swedish researchers from institutions including Uppsala University have spent four years gathering data from the areas affected by the major forest fire of 2014.

Swedish researchers from institutions including Uppsala University have spent four years gathering data from the areas affected by the major forest fire of 2014. In their study of how the ecosystem as a whole has been altered, they could see that water quality in watercourses quickly returned to normal, while forested areas continued to lose carbon for many years after the fire.

The consequences of major forest fires remain poorly studied in Northern Europe. To improve this situation, researchers from Uppsala University, the Swedish University of Agricultural Sciences (SLU) and the Swedish Meteorological and Hydrological Institute (SMHI) decided to investigate just how much carbon and nutrients are released into the atmosphere and watercourses during fires and how quickly the ecosystem returns to its previous state. The results of this research are now being presented in the scientific journal Biogeosciences.

The 2014 fire in the Swedish province Västmanland was particularly ferocious, burning both woodland and wetland. Only in a few areas did the trees survive.

“It is not however the trees that release carbon during fires in coniferous forests. Only some of the needles and small branches up in the trees burn, while around 90% of losses come from organic soil, the so-called humus layer. Ditched peatlands that dry a great deal of organic material in the soil are therefore large point sources for emissions from the landscape. This makes it important to measure how deep the burning goes in the ground in order to estimate carbon emissions after a forest fire. We had the opportunity to do just that over a wide area in Västmanland,” says Uppsala University researcher Gustaf Granath, lead author of the study.

Image: Hälleskogsbrännan, Västmanland, Sweden, three months after the fire in 2014. Almost all organic soil in the area was lost, which released large amounts of carbon and nitrogen. (Credit: Joachim Strengbom)