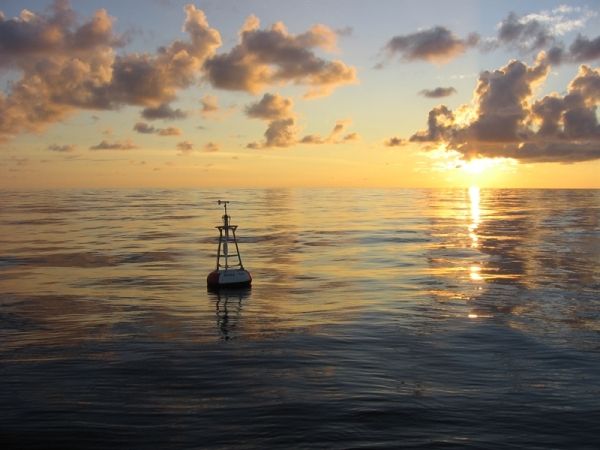 Keeping track of ocean health is critical for understanding climate change, weather patterns, and the health of important fisheries. But how do NOAA and partner scientists gather data on such a vast environment?

One big way is with buoys, ocean observing platforms that help scientists monitor the global ocean — including in remote, hard-to-reach areas. Some of these buoys float along the ocean surface, gathering data as they drift with currents (sometimes even into the paths of hurricanes!). Some, meanwhile, are moored to the ocean floor, collecting data in the same region and helping scientists observe changes over several years or decades. In honor of Ocean Month, we’re highlighting five buoys that help NOAA scientists monitor and understand the ocean (and the Great Lakes, too!).

Monitoring the Bering Sea with Peggy
NOAA’s biophysical mooring site 2 — nicknamed “Peggy” — is one tough buoy. Since 1995, Peggy has been taking year-round measurements of temperature, salt content, nitrate, chlorophyll and currents in the remote Bering Sea. Data collected by Peggy has been used by scientists to study the cold pool and loss of sea ice in the Bering Sea, a region that supports large marine mammal and bird populations and some of the most profitable and sustainable commercial fisheries in the United States. Peggy is named for Peggy Dyson, who for 25 years, from her home in Kodiak, Alaska, reported the weather, family messages, and sometimes even paid bills for the mariners of the North Pacific Ocean.