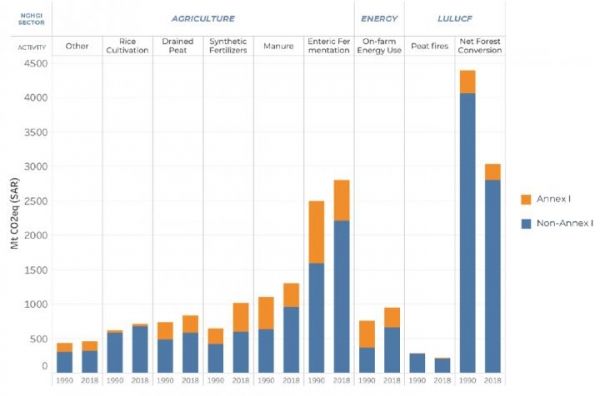 A new global analysis says that greenhouse-gas emissions from food systems have long been systematically underestimated—and points to major opportunities to cut them.

A new global analysis says that greenhouse-gas emissions from food systems have long been systematically underestimated—and points to major opportunities to cut them. The authors estimate that activities connected to food production and consumption produced the equivalent of 16 billion metric tons of carbon dioxide in 2018—one third of the human-produced total, and an 8 percent increase since 1990. A companion policy paper highlights the need to integrate research with efforts to reduce emissions. The papers, developed jointly by the UN Food and Agriculture Organization, NASA, New York University and experts at Columbia University, are part of a special issue of Environmental Research Letters on sustainable food systems.

The Center on Global Energy Policy has also produced a detailed guide to food systems and climate, and a related video, both geared to the general public.

The lead author of the analysis, Francesco Tubiello, heads the environment statistics unit at FAO. He said the study shows that food production represents a “larger greenhouse-gas mitigation opportunity than previously estimated, and one that cannot be ignored in efforts to achieve the Paris Agreement goals.” He said emissions inventories that countries currently report to the United Nations Framework Convention on Climate Change poorly characterize food systems, and underestimate their contribution to climate change.