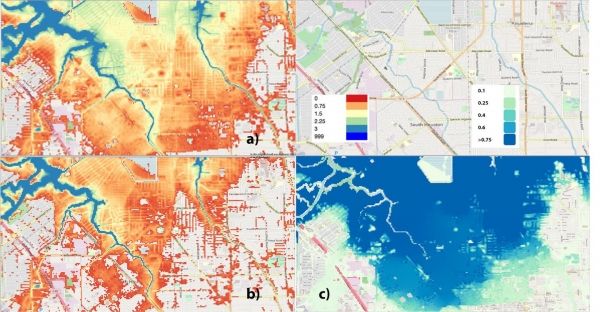 How much do the effects of climate change contribute to extreme weather events?

How much do the effects of climate change contribute to extreme weather events? It’s hard to say—the variables involved are plentiful, each event is unique, and we can only do so much to investigate what didn’t happen. But a new paper from Lawrence Berkeley National Laboratory (Berkeley Lab) climate scientist Michael Wehner investigates the question for one particular element of one significant storm and makes the results available to those who lived through it.

In the paper, “Attributable human-induced changes in the magnitude of flooding in the Houston, Texas region during Hurricane Harvey,” published May 19 in Climatic Change, Wehner and Christopher Sampson from Fathom Bristol used a hydraulic model—a mathematical model that can analyze the flow of fluid through a particular system of natural or human-made channels—to consider the degree to which human-caused climate change may have affected flooding in and around Houston during the massive 2017 storm, and the ways in which that flooding was distributed. Wehner and Sampson used resources at the National Energy Research Scientific Computing Center (NERSC) to quantify the increase in Houston flood area and depth from the hydraulic model output and to host a portal where other scientists and the public can access the data for their own use.

From August 26 through August 31, 2017, Hurricane Harvey stalled over the Houston area, flooding 154,000 structures and 600,000 cars; 37,000 people were displaced, and more than 70 died in the floodwaters. Adjusted for inflation, it was the second-most financially expensive tropical storm in United States history, costing between $85 billion and $125 billion.