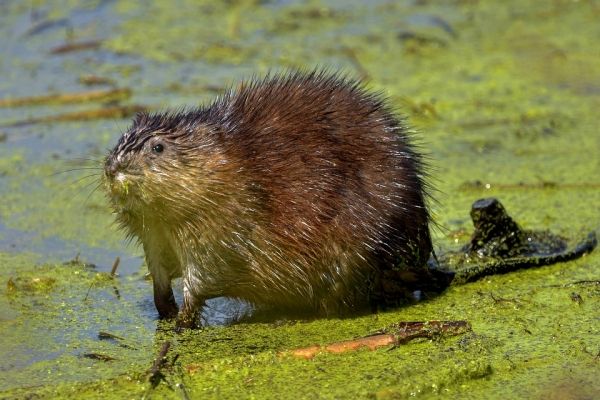 Downstream of hydroelectric dams and Alberta’s oil sands, one of the world’s largest freshwater deltas is drying out.

Downstream of hydroelectric dams and Alberta’s oil sands, one of the world’s largest freshwater deltas is drying out. New Stanford University research suggests long-term drying is making it harder for muskrats to recover from massive die-offs. It’s a sign of threats to come for many other species.

The muskrat, a stocky brown rodent the size of a Chihuahua – with a tail like a mouse, teeth like a beaver and an exceptional ability to bounce back from rapid die-offs – has lived for thousands of years in one of Earth’s largest freshwater deltas, in northeastern Alberta, Canada.

Today, this delta lies within one of the largest swaths of protected land in North America: a national park five times the size of Yellowstone that’s home to the planet’s biggest herd of free-roaming bison and the last natural nesting ground for the endangered whooping crane. It’s also central to the culture and livelihoods of Indigenous peoples, including the Mikisew Cree First Nation, Athabasca Chipewyan First Nation and Métis Local 125.

New research focused on muskrat population dynamics in the Peace-Athabasca Delta, published June 24 in Communications Biology, demonstrates the vulnerability of even this most protected landscape to human-driven changes to water systems and the global climate.