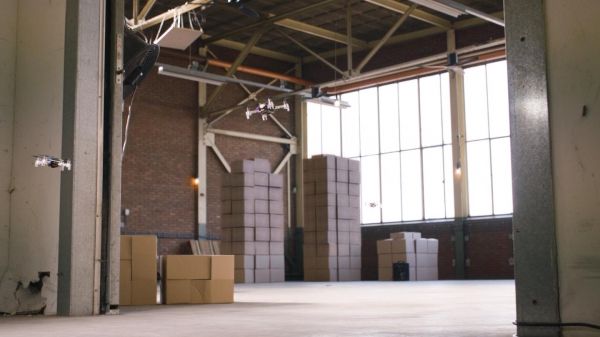 When there is a gas leak in a large building or at an industrial site, human firefighters currently need to go in with gas sensing instruments.

When there is a gas leak in a large building or at an industrial site, human firefighters currently need to go in with gas sensing instruments. Finding the gas leak may take considerable time, while they are risking their lives. Researchers from TU Delft (the Netherlands), University of Barcelona, and Harvard University have now developed the first swarm of tiny – and hence very safe – drones that can autonomously detect and localize gas sources in cluttered indoor environments.

The main challenge the researchers needed to solve was to design the Artificial Intelligence for this complex task that would fit in the tight computational and memory constraints of the tiny drones. They solved this challenge by means of bio-inspired navigation and search strategies. The scientific article has now been made public on the ArXiv article server, and it will be presented at the renowned IROS robotics conference later this year. The work forms an important step in the intelligence of small robots and will allow finding gas leaks more efficiently and without the risk of human lives in real-world environments.

Autonomous gas source localization is a complex task. For one, artificial gas sensors are currently less capable than animal noses in detecting small amounts of gas and staying sensitive to quick changes in gas concentration. Moreover, the environment in which the gas spreads can be complex. Consequently, much of the research in this area has focused on single robots that search for a gas source in rather small, obstacle-free environments in which the source is easier to find.

Images: A swarm of tiny drones entering a building in search of a gas leak. The research team used modified "CrazyFlie" drones, which are 12 cm in diameter weighed only 37.5 grams. (Credit: Mavlab/TU Delft)