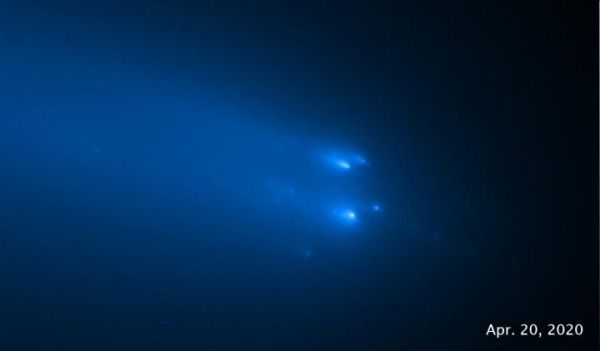 A serendipitous flythrough of the tail of a disintegrated comet has offered scientists a unique opportunity to study these remarkable structures, in new research presented today at the National Astronomy Meeting 2021.

A serendipitous flythrough of the tail of a disintegrated comet has offered scientists a unique opportunity to study these remarkable structures, in new research presented today at the National Astronomy Meeting 2021.

Comet ATLAS fragmented just before its closest approach to the Sun last year, leaving its former tail trailing through space in the form of wispy clouds of dust and charged particles. The disintegration was observed by the Hubble Space Telescope in April 2020, but more recently the ESA spacecraft Solar Orbiter has flown close to the tail remnants in the course of its ongoing mission.

This lucky encounter has presented researchers with a unique opportunity to investigate the structure of an isolated cometary tail. Using combined measurements from all of Solar Orbiter’s in-situ instruments, the scientists have reconstructed the encounter with ATLAS’s tail. The resulting model indicates that the ambient interplanetary magnetic field carried by the solar wind ‘drapes’ around the comet, and surrounds a central tail region with a weaker magnetic field.

Comets are typically characterized by two separate tails; one is the well-known bright and curved dust tail, the other - typically fainter - is the ion tail. The ion tail originates from the interaction between the cometary gas and the surrounding solar wind, the hot gas of charged particles that constantly blows from the Sun and permeates the whole Solar System.

Image: Hubble Space Telescope image of comet C/2019 Y4 (ATLAS), taken on April 20 2020, providing the sharpest view to date of the breakup of the solid nucleus of the comet. Hubble's eagle-eye view identifies as many as 30 separate fragments, and distinguishes pieces that are roughly the size of a house. Before the breakup, the entire nucleus of the comet may have been the length of one or two football fields. The comet was approximately 91 million miles (146 million kilometres) from Earth when the image was taken. (Credit: NASA / ESA / STScI / D. Jewitt (UCLA))