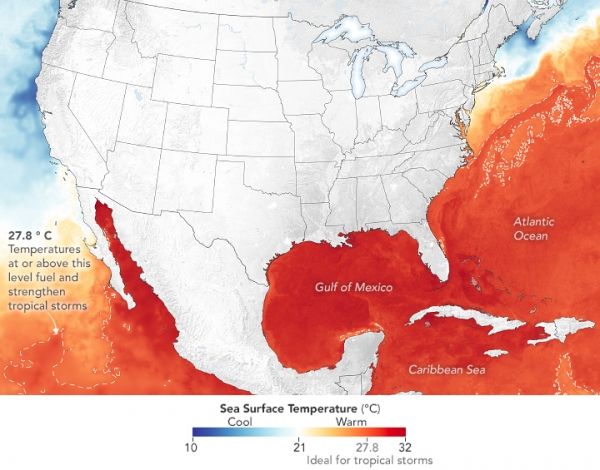 Sea surface temperatures are a fair predictor of the readiness of the ocean to fuel and sustain storms.

Heading into the peak of hurricane season, the seas around North and Central America are primed to fuel storm development and intensification in the Atlantic and Eastern Pacific. While sea surface temperatures are just one factor influencing the development of hurricanes, they are a fair predictor of the readiness of the ocean to sustain them.

The map above shows sea surface temperatures (SSTs) as measured on August 11, 2021, by a combination of satellite and ocean instruments. Meteorologists generally agree that SSTs above 27.8° Celsius (82° Fahrenheit) intensify and sustain hurricanes, cyclones, and typhoons. Surface waters above that threshold are represented in red on the map. Note the finger of warm water—the Gulf Stream—running parallel to the U.S. East Coast.