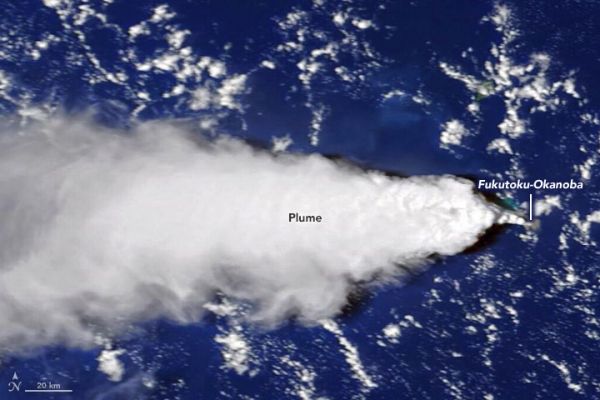 The eruption of an underwater volcano near South Iwo Jima sent a plume soaring into flight paths and created an expansive raft of floating rock.

Over the past decade, the Japan Coast Guard has occasionally spotted patches of milky blue water about 5 kilometers (3 miles) north of South Iwo Jima island. The discolored water has been a subtle reminder that the summit of an active volcano—Fukutoku-Okanoba—lurks about 25 meters (80 feet) below the water surface.

On August 13, 2021, there was much more than just discolored water. A photograph taken by a Coast Guard aircraft flying near the volcano showed a towering plume of gas rising several kilometers into the air—a sure sign that explosive “Surtseyan” eruptions were happening.

Satellite observations and follow-up flights filled in more details. The Japanese geostationary satellite Himawari 8 was among the first satellites to observe the eruption, showing its beginning stages at about 21:00 UTC (6 a.m. local time) on August 12, 2021. When NASA’s Moderate Resolution Imaging Spectroradiometer (MODIS) sensor on the Terra satellite acquired its first image of the event on August 13, it showed a bright plume—likely steam and volcanic gases—streaming from the vent and stretching hundreds of kilometers to the west.