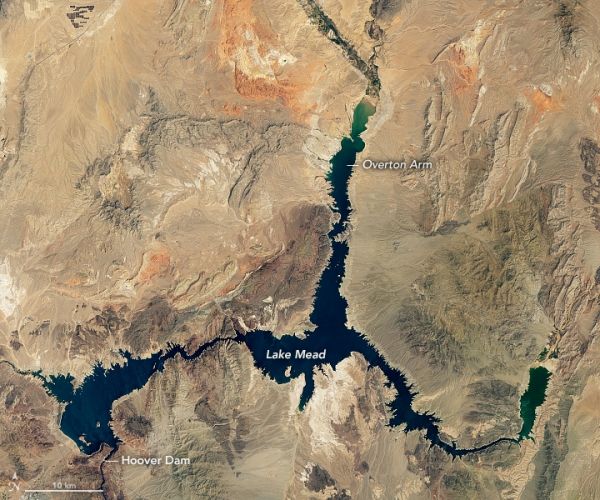 The reservoir stands at its lowest level since the 1930s.

Lake Mead is the largest reservoir in the United States and part of a system that supplies water to at least 40 million people across seven states and northern Mexico. It stands today at its lowest level since Franklin Delano Roosevelt was president. This means less water will be portioned out to some states in the 2022 water year.

As of August 22, 2021, Lake Mead was filled to just 35 percent of its capacity. The low water level comes at a time when 95 percent of the land in nine Western states is affected by some level of drought (64 percent is extreme or worse). It continues a 22-year megadrought that may be the region’s worst dry spell in twelve centuries.

These natural-color images were acquired in August 2000 and August 2021 by Landsat 7 and Landsat 8. The tan fringes along the shoreline in 2021 are areas of the lakebed that would be underwater when the reservoir is filled closer to capacity. The phenomenon is often referred to as a “bathtub ring.”