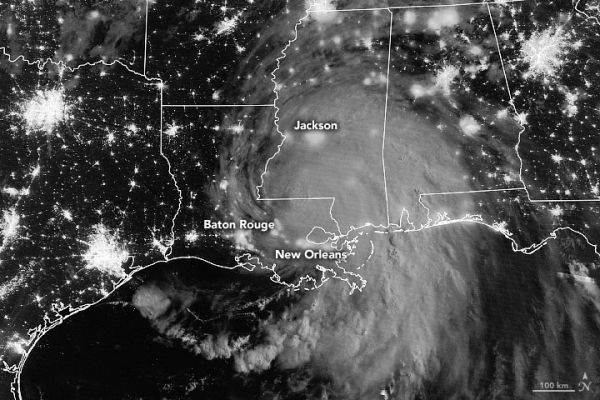 Preliminary reports suggest it is the fifth-strongest storm ever to make landfall in the continental U.S.

Exactly 16 years after Katrina made landfall, another major hurricane blew into southern Louisiana. Around noon on August 29, 2021, Hurricane Ida came ashore at Port Fourchon with sustained winds of 150 miles (240 kilometers) per hour and a central pressure of 930 millibars. Preliminary reports suggest it is the fifth strongest hurricane (based on wind speed) ever to make landfall in the continental U.S.

At 2:50 a.m. Central Daylight Time on August 30, the Visible Infrared Imaging Radiometer Suite (VIIRS) on the Suomi NPP satellite acquired a nighttime view (above) of Hurricane Ida. On the morning of August 29, the NOAA GOES-16 satellite acquired data for an animation of the menacing eyewall approaching the coast.

In the last 24 hours before landfall, the storm’s central pressure dropped from 985 millibars to 929, and winds intensified rapidly from 85 to 150 miles per hour. According to the National Hurricane Center, a storm has undergone “rapid intensification” when winds increase by at least 35 miles per hour within 24 hours. The intensification was partly fueled by the hot summer surface waters of the Gulf of Mexico, which were about 30–31° Celsius (86–88° Fahrenheit).