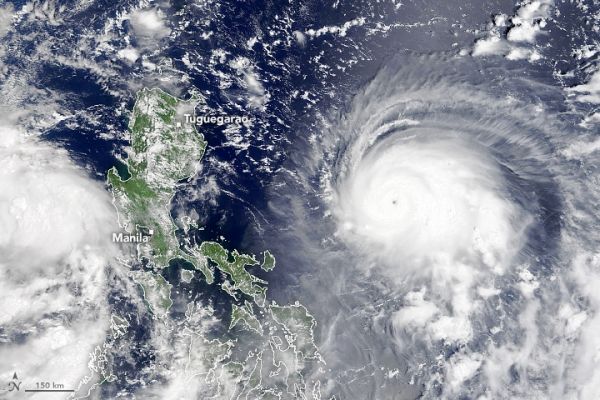 The potent storm in the Western Pacific intensified from a tropical depression to a super typhoon in less than 48 hours.

In recent years, meteorologists and climate scientists have been awed by the rapid intensification of several tropical cyclones around the world—a phenomenon that is believed to become more likely in a warming world. This week, Super Typhoon Chanthu provided another stark example of how quickly a storm can strengthen.

Chanthu first became a tropical depression in the early afternoon on September 6, 2021. Within 48 hours, it had increased to super typhoon strength. Wind speeds accelerated from 50 kilometers (30 miles) per hour to 260 kilometers (160 miles) per hour. According to NOAA scientist Sam Lillo, only five storms on record have intensified at such a rate.

In the late morning on September 9, 2021, the Moderate Resolution Imaging Spectroradiometer (MODIS) on NASA’s Terra satellite acquired this natural-color image of Chanthu as it churned the Philippine Sea. By 11 p.m. Philippine Standard Time (1500 Universal Time) on September 9, the typhoon was about 550 kilometers (300 nautical miles) east-northeast of Manila, with sustained winds of 220 kilometers (140 miles) per hour. Significant wave heights in the open ocean were approaching 14 meters (45 feet).