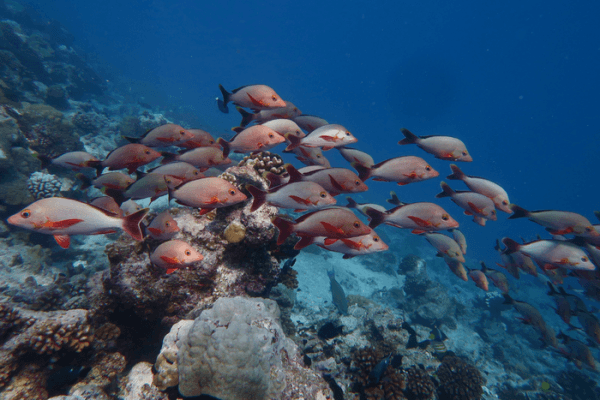 Coral reefs all over the world, already threatened by rising temperatures brought about by climate change, also face serious challenges from the possibility of fish species extinctions.

Coral reefs all over the world, already threatened by rising temperatures brought about by climate change, also face serious challenges from the possibility of fish species extinctions. According to a paper out today in the Proceedings of the National Academy of Sciences, the networks of predator fish and their prey found on coral reefs all over the world are remarkably similar, and those predator fish are pickier eaters than previously thought. These delicate ecosystems become even more vulnerable when these specialized hunters go extinct.

Coral reefs are some of the most diverse ecosystems on Earth, providing critical habitat for thousands of species that sustain economies and provide for the diets and livelihoods of millions of people. In the largest and most comprehensive study of its kind, researchers from France and The University of Texas at Austin concluded that coral reef food webs are more delicate than previously thought. Researchers made the conclusion after synthesizing the stomach contents of most fish species found on six coral reef systems around the world.

The team revealed that the vast majority of reef fish species are very picky about what they eat, rather than opportunistically feeding on anything they could find. Although reefs will probably withstand the loss of several prey species, the loss of a single larger fish species may jeopardize the ecosystem.

“It’s remarkable that we see similar patterns in coral reef systems all over the world. Extinctions, particularly of larger fish species, may have significant impacts for coral reef systems,” said Jordan Casey, an assistant professor of marine science at UT Austin’s Marine Science Institute (UTMSI) and an author on the paper.

Image: Researchers have found that reefs can probably withstand the loss of several prey species, but the loss of a single larger fish species can jeopardize the ecosystem. (Credit: Jordan Casey, University of Texas at Austin)