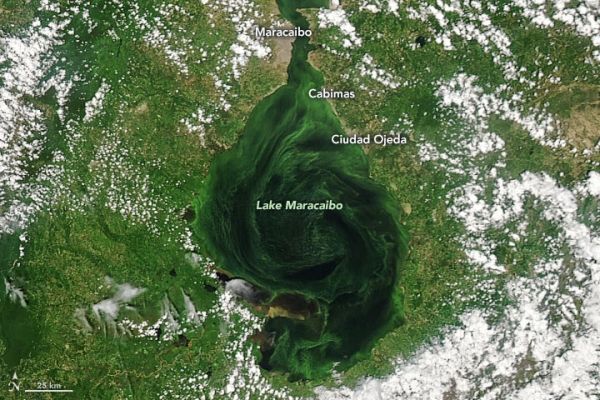 Venezuela’s Lake Maracaibo is choking with oil slicks and algae.

It was once a source of great abundance—particularly fossil fuels and fish—for the people of Venezuela. Now Lake Maracaibo is mostly abundant with pollution from leaking oil and excess nutrients.

Spanning 13,000 square kilometers (5,000 square miles) in northwestern Venezuela, Lake Maracaibo is one of South America’s largest lakes and one of the oldest in the world. Though it was filled with freshwater thousands of year ago, Maracaibo is now an estuarine lake connected to the Gulf of Venezuela and the Caribbean Sea by a narrow strait. That strait was significantly expanded in the 1930–50s by dredging for ship traffic. Now the north end of the lake is brackish, while the south end is mostly fresh due to abundant flows from nearby rivers.

In satellite images acquired in September 2021, Lake Maracaibo was swirling with shades of green, tan, and gray that traced the flow of currents and eddies. The sources of those colors were algae, river sediment outflows, and crude oil leaks. The image at the top of this page was acquired by the Moderate Resolution Imaging Spectroradiometer (MODIS) on NASA’s Aqua satellite on September 25. The Operational Land Imager (OLI) on Landsat 8 observed the scene below on September 10.