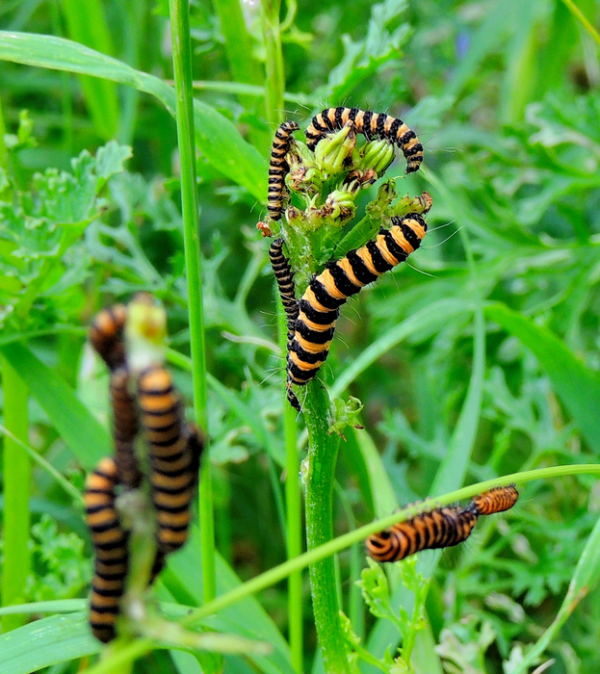 Young birds that eat insects with conspicuous warning colouration to advertise their toxicity to would-be predators quickly learn to avoid other prey that carry the same markings.

Young birds that eat insects with conspicuous warning colouration to advertise their toxicity to would-be predators quickly learn to avoid other prey that carry the same markings. Developing on this understanding, a University of Bristol team have shown for the very first time that birds don’t just learn the colours of dangerous prey, they can also learn the appearance of the plants such insects live on.

To do this, the scientists exposed artificial cinnabar caterpillars, characterised by bright yellow and black stripes, and non-signalling fake caterpillar targets to wild avian predation by presenting them on ragwort and a non-toxic plant - bramble, which is not a natural host of the cinnabar. Both target types survived better on ragwort compared to bramble when experienced predators were abundant in the population.

They were also interested in whether birds use the bright yellow flowers of ragwort as a cue for avoidance. They tested this by removing spikes of flowers from the ragwort and pinning them onto bramble, then recording target survival on either plant. In this second experiment, only the non-signalling targets survived better on plants with ragwort flowers, compared to the same plant type without the flowers. The survival of the cinnabar-like target was equal across all plant treatments.