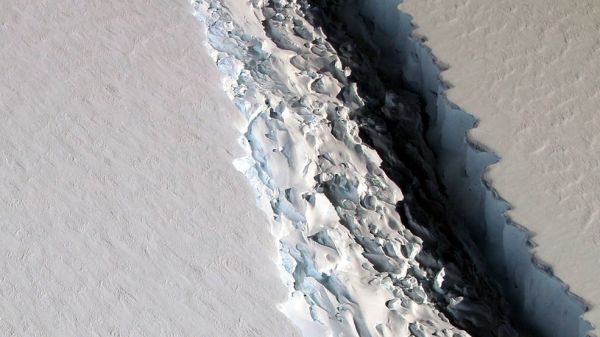 As the ice-and-snow rubble known as mélange melts in Antarctica’s ice shelves, rifts can grow and icebergs break off even in the brutal cold of winter.

Researchers at NASA’s Jet Propulsion Laboratory in Southern California and the University of California, Irvine, have discovered an ice process that may have caused a Delaware-size iceberg to break off Antarctica’s immense Larsen C ice shelf in the Southern Hemisphere winter of 2017. The finding that mélange – a mixture of windblown snow, iceberg bits, and sea ice lodged in and around ice shelves – is critical in holding ice shelves together implies that the these ice shelves may break up even faster than scientists had expected due to rising air temperatures.

Ice shelves, the floating tongues of glaciers that extend over the ocean, slow the rate at which Antarctica’s glaciers contribute to global sea level rise. As a glacier’s ice shelf flows out over the Southern Ocean, it eventually snags on an island, undersea ridge, or the wall of the bay that encloses the glacier. The snag slows the glacier’s forward movement in the same way a highway accident slows down the traffic behind it – except that an ice-shelf snag can hold back the flow of ice into the sea for thousands of years.

But in recent decades, ice shelves in the Antarctic Peninsula have been moving and disintegrating more rapidly. Cracks deepen into rifts that cut through the shelf from top to bottom and widen across, finally releasing icebergs into the ocean. If this process continues until enough of an ice shelf breaks off (as with Larsen B in 2002), the glaciers that the shelf was holding back begin flowing more rapidly from the land into the sea. This increases the rate of sea level rise.