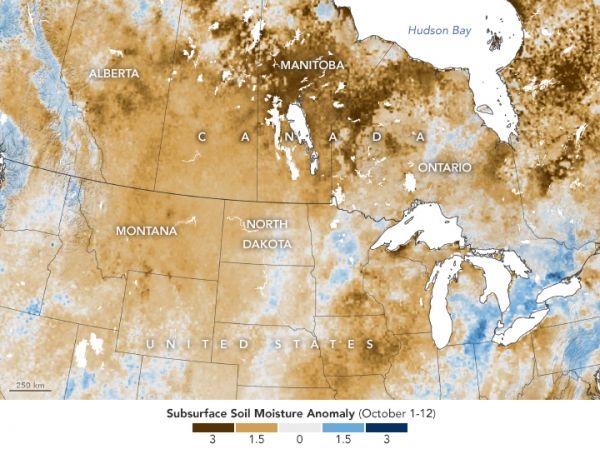 Warm and dry conditions continue to affect agricultural lands in the U.S. Northern Plains and the Canadian Prairies.

Decades of drought across the U.S. Southwest has led some scientists to classify the intense, prolonged dryness as a “megadrought.” But drought in North America took a different shape in 2021, affecting areas that do not face long-term or intense drought as often. The northern Great Plains has been coping with drought for months.

According to the U.S. and Canadian drought monitors, “extreme” drought first took hold in North Dakota and Manitoba in mid-March 2021. By summer, extreme and “exceptional” drought (the worst classification) had spread to parts of Montana, Minnesota, Alberta, and Saskatchewan. Recent autumn rainfall has lessened the impact in some areas, but for the most part soils remain parched.

Drought in the northern Great Plains can affect the production of crops, as well as forage for livestock. When assessing drought and its potential to affect agriculture, scientists look at a wide range of indicators such as precipitation, temperature, evapotranspiration, and how much moisture is held in the soil.