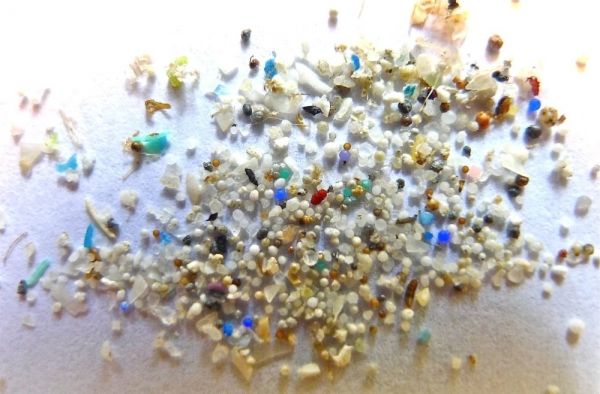 Like the ash spewed from a supervolcano, microplastics have infested the atmosphere and encircled the globe. These are bits of plastic less than 5 millimeters long, and they come in two main varieties.

Like the ash spewed from a supervolcano, microplastics have infested the atmosphere and encircled the globe. These are bits of plastic less than 5 millimeters long, and they come in two main varieties. Fragments spawn from disintegrating bags and bottles (babies drink millions of tiny particles a day in their formula), and microfibers tear loose from synthetic clothing in the wash and flush out to sea. Winds then scour land and ocean, carrying microplastics high into the atmosphere. The air is so lousy with the stuff that each year, the equivalent of over 120 million plastic bottles fall on 11 protected areas in the U.S., which account for just 6 percent of the country’s total area.

In a study published today in the journal Nature, scientists have taken a first swing at modeling how the atmospheric particles could be influencing the climate, and it’s a strange mix of good news and bad. The good news is that microplastics may be reflecting a tiny bit of the sun’s energy back into space, which would actually cool the climate ever so slightly. The bad news is that humanity is loading the environment with so much microplastic (ocean sediment samples show that concentrations have been doubling every 15 years since the 1940s), and the particles themselves are so varied, that it’s hard to know how the pollutant will ultimately influence the climate. At some point they may end up heating the planet.

Earth absorbs some of the sun’s energy while also reflecting some of it, an exchange known as radiative forcing. Like other aerosols in the atmosphere, such as dust and ash, microplastics interact with this energy, the modeling found. “They’re very good at scattering sunlight back to space, so we see that cooling influence coming through,” says atmospheric chemist Laura Revell, lead author of the new paper. “But they are also pretty good at absorbing the radiation emitted by the Earth, which means that they can contribute to the greenhouse effect in a very small way.”