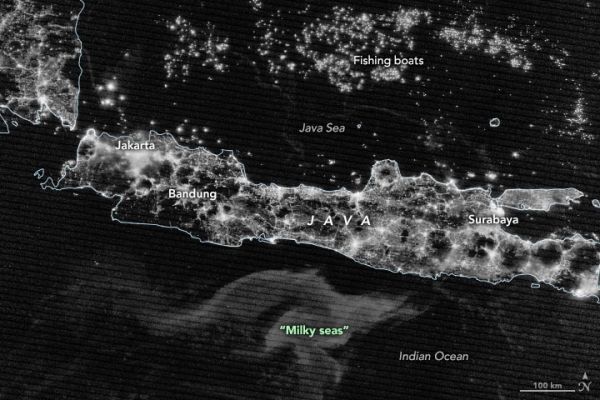 Like a sea captain tracking a white whale, Steve Miller has been chasing a rare form of marine bioluminescence for decades.

Like a sea captain tracking a white whale, Steve Miller has been chasing “milky seas” for decades. He has been looking for examples of a rare form of marine bioluminescence, and the arrival of new night-light sensing satellite instruments has allowed him to detect several of these rare events. It also has given scientists a better chance to sample future events.

Milky seas are a rare form of bioluminescence that mariners have described as looking like a snow field spread across the ocean. The steady white glow can stretch for vast distances, and it is not disturbed by ship wakes. Sailors have sporadically encountered this phenomenon since at least the 1600s, and Jules Verne dropped a reference to it into Twenty Thousand Leagues Under the Sea.

“A cool thing about milky seas is that they are so elusive, usually out on the high seas and away from major shipping lanes,” Miller noted. “As a result, they have remained mostly a part of maritime folklore.”