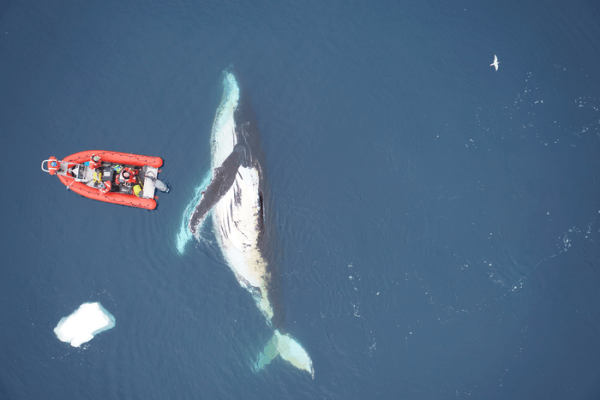 From 1910 to 1970, humans killed an estimated 1.5 million baleen whales in the frigid water encircling Antarctica.

From 1910 to 1970, humans killed an estimated 1.5 million baleen whales in the frigid water encircling Antarctica. They were hunted for their blubber, baleen – the filtering fringe they have in place of teeth – and meat. One might assume that from the perspective of krill – the tiny shrimp-like creatures the whales feast on – this would be a boon. But new research published Nov. 3 in Nature from a collaboration led by Stanford University’s Goldbogen Lab suggests the opposite: that the decline of baleen whales in the Southern Ocean has led to a decline of krill.

This paradoxical result is a sign of just how much the precipitous decline of the large marine mammals has negatively impacted the health and productivity of ocean ecosystems, the researchers say.

“Fifty years after we stopped hunting whales, we’re still learning what impact that had. The system is not the same,” said Matthew Savoca, a postdoctoral scholar in the Goldbogen lab at Stanford’s Hopkins Marine Station and lead author of the paper. “We’re looking into ways of using this information to restore ocean ecosystems and bring whales back. And hopefully, that will have benefits for everything from biodiversity conservation to fisheries yield to carbon storage.”

The researchers came to their troubling conclusion after asking a very fundamental question: How much do whales eat?

Image: Researchers from Stanford University, UC Santa Cruz and Duke University investigate a humpback whale by boat and drone in the surface waters near the Western Antarctic Peninsula. (Credit: Duke University Marine Robotics and Remote Sensing under NOAA permit 14809-03 and ACA permits 2015-011 and 2020-016)