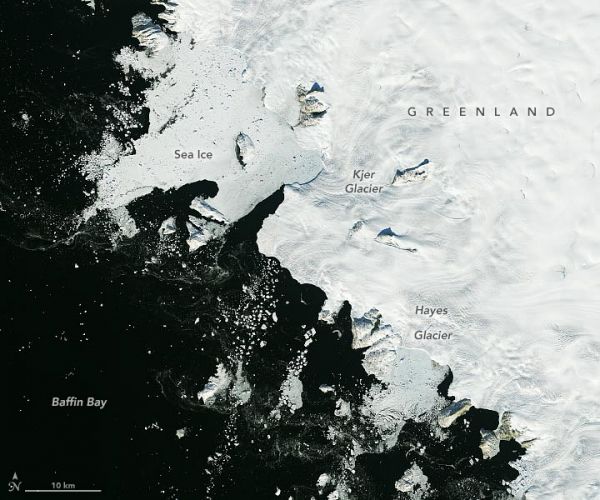 Like so many glaciers in Greenland, Kjer has retreated significantly in recent decades and now flows more rapidly toward the ocean.

Change is constant and common on Earth across geologic time. But in the icy polar regions, change has been dramatic and swift in the past few decades. One example is northwest Greenland, where quite a lot has changed in 21 years.

The image pair above shows part of Greenland along Melville Bay (a sub-section of Baffin Bay) on September 3, 2000, and September 21, 2021. The images were acquired with the Enhanced Thematic Mapper Plus (ETM+) on Landsat 7 and the Operational Land Imager (OLI) on Landsat 8, respectively. (Note that Earth Observatory originally published a version of the 2000 image in false color. Both images above are natural color and show a slightly wider view.)

The images show a 80-kilometer (50-mile) stretch of coastline. Like so many places around the edges of Greenland, a series of glaciers here carry ice from the island’s interior toward the coast and onto the ocean. Most of these marine-terminating glaciers are retreating. Kjer and Hayes—the two main outlet glaciers shown above—are also speeding up.