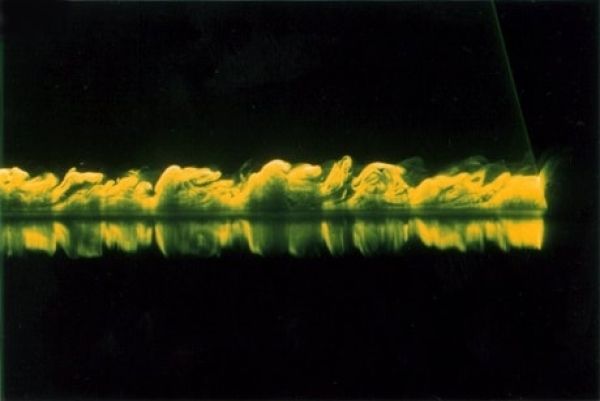 Turbulence makes many people uneasy or downright queasy. And it’s given researchers a headache, too. Mathematicians have been trying for a century or more to understand the turbulence that arises when a flow interacts with a boundary, but a formulation has proven elusive.

Now an international team of mathematicians, led by UC Santa Barbara professor Björn Birnir(link is external) and the University of Oslo professor Luiza Angheluta, has published a complete description of boundary layer turbulence. The paper appears in Physical Review Research(link is external), and synthesizes decades of work on the topic. The theory unites empirical observations with the Navier-Stokes equation — the mathematical foundation of fluid dynamics — into a mathematical formula.

This phenomenon was first described around 1920 by Hungarian physicist Theodore von Kármán and German physicist Ludwig Prandtl, two luminaries in fluid dynamics. “They were honing in on what’s called boundary layer turbulence,” said Birnir, director of the Center for Complex and Nonlinear Science. This is turbulence caused when a flow interacts with a boundary, such as the fluid’s surface, a pipe wall, the surface of the Earth and so forth.