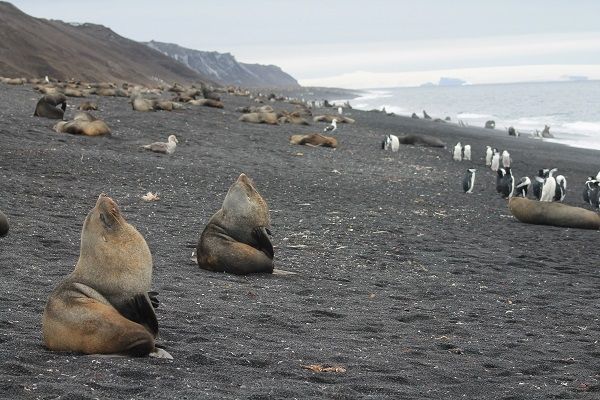 The climate crisis is limiting the availability of krill —small crustaceans that are vital in the marine food chain— during summer in some areas of the Antarctica.

The climate crisis is limiting the availability of krill —small crustaceans that are vital in the marine food chain— during summer in some areas of the Antarctica. This involves a decrease in the food abundance for female Antarctic fur seals in summer and a decrease in their reproductive success. Moreover, the predation of pups by the leopard seal has also increased due to a lower abundance of penguins, the main prey of this voracious Antarctic predator. However, the impact of the climate crisis on the Antarctic fur seal in winter has been ignored to date, when the cold, wind and ice make it harder to study the Antarctic ecosystems.

Thanks to satellite tracking, we know how this marine mammal is distributed over the winter months in the Antarctica, as well as its relationship with krill and the Antarctic icefield during this period, according to an article published in the journal Scientific Reports by the experts Lluís Cardona, Manel Gazo, David March, Massimiliano Drago and Diego Rita, from the Faculty of Biology and the Biodiversity Research Institute of the UB (IRBio), and Mariluz Parga, from the SUBMON association.

How does the Antarctic fur seal adapt to global change?

The Antarctic fur seal (Arctocephalus gazelle) —a marine mammal that only lives in the Southern Ocean— was intensively exploited by the fur industry during the first half of the 19th century. After a notable recovery, the populations of these pinnipeds are now regressing since 2003.

This predator feeds mainly from krill —the Antarctic crustacean Euphasia superba— and fish. Most of their breeding colonies are close to the Antarctic Polar Front but the South Shetland Islands —surrounded by the polar icefield in winter— host the most southern population of the species and the only Antarctic one. Now, the study provides answers to many doubts about the importance of environmental factors that regulate the distribution of this population in winter and their link to the ice cycle and krill.

Read more at: University of Barcelona

The most important reproductive population of the Antarctic fur seal is in the South Georgia islands. (Photo Credit: Lluís Cardona (UB-IRBio))