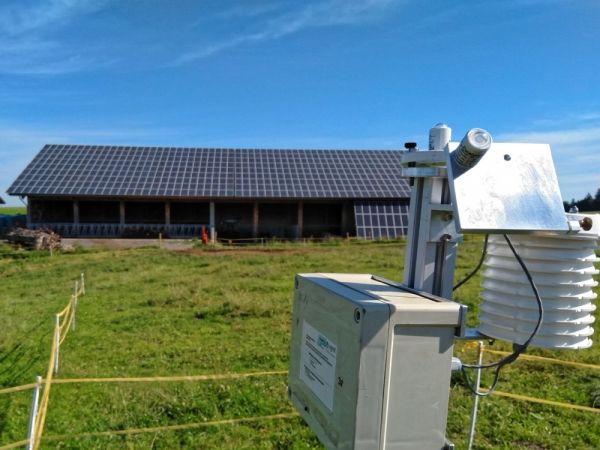 The warming or cooling of the atmosphere does not only depend on clouds and greenhouse gases. Aerosol particles also play an important role.

The warming or cooling of the atmosphere does not only depend on clouds and greenhouse gases. Aerosol particles also play an important role. The tiny particles (also known as particulate matter) float in the air and, despite their small size, reflect and absorb some of the sun's energy. Too little is currently known about how strongly this effect influences the amount of electricity generated from photovoltaic (PV) systems. In the interdisciplinary research project "MetPVNet", experts from atmospheric research and the field of renewable energies therefore worked together to (further) develop innovative energy meteorological methods for predicting irradiation and PV output at plant level and to test them with practical partners.

As part of the joint project, which ran from 2017 to 2021, a study was also conducted which has now been published. This study examined the radiative effect of aerosol as an example for Germany during 2015 on the ground and within the atmosphere using two complementary modelling approaches: Firstly, data on solar radiation in cloud-free situations from 25 stations of the observation network of the German Weather Service (DWD) and the global AERONET network throughout Germany were considered. On the other hand, the radiative effect was estimated by explicit radiative transfer simulations based on the reanalysis of the Copernicus Atmosphere Monitoring Service (CAMS) of the European Union (ESA) on atmospheric composition.

The evaluation which has now been published demonstrated for the example year 2015 that there is a clear gradient in solar energy in Germany: Due to the higher position of the sun, it shines more intensively in the south of the Federal Republic on an annual average of up to 0.5 megawatt hours per square metre than in the north. Due to aerosol from continental sources, solar energy is dimmed in the east of Germany compared to the west. Both effects overlap and ensure that the annual average yield of photovoltaic systems on the Neisse River in the far east of Germany is up to 0.05 megawatts per square metre lower than in the Alps in the far south of Germany. In practice, a variety of other influencing factors from cloud cover to the height of the solar installation play a role.

Analyses of the influence of aerosols on the yield of photovoltaic systems contribute to better utilisation of electricity grids and to making the energy transition more secure. A measurement campaign in Allgäu as part of the MetPVNet project provided important data for estimating the production of solar electricity. (Photo Credit: Jonas Witthuhn, TROPOS)