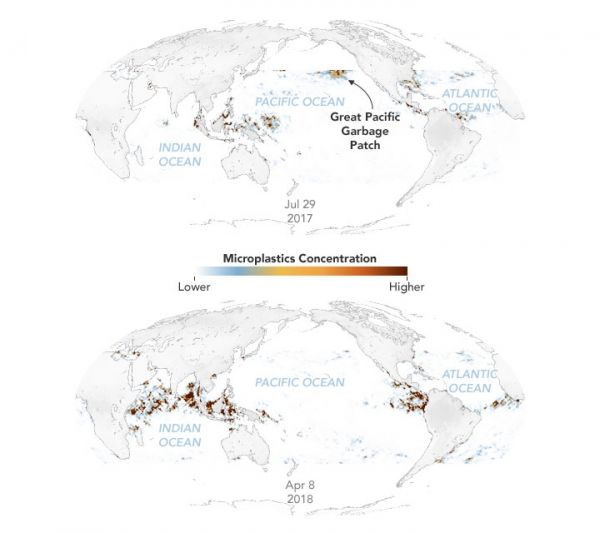 Researchers used satellite data to detect and track masses of plastic floating in the ocean.

About 8 million tons of plastic flow from rivers and beaches into the ocean every year. These plastics are carried by ocean currents and broken down by waves and sunlight into small microplastics. Much of that debris collects in the calm centers of ocean gyres in large floating garbage patches. The Great Pacific Garbage Patch, between California and Hawaii, is the most well-known because a lot of ship traffic passes through it.

Scientists typically estimate the amount plastic in marine garbage patches by dragging nets behind boats. However, this sampling method is geographically sparse and does not give researchers a sense of how much plastic concentrations change over time.

Researchers at the University of Michigan (UM) recently developed a new method to map the concentration of ocean microplastics around the world. The researchers used data from eight microsatellites that are part of the Cyclone Global Navigation Satellite System (CYGNSS) mission. Radio signals from GPS satellites reflect off the ocean surface, and CYGNSS satellites detect those reflections. Scientists then analyze the signals to measure the roughness of the ocean surface. These measurements provide scientists with a means to derive ocean wind speeds, which is useful for studying phenomena like hurricanes. It turns out that the signals also reveal the presence of plastic.