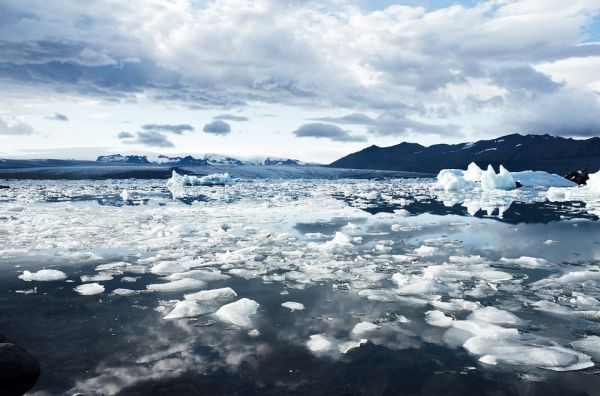 In the summer months, sea ice from the Arctic drifts through Fram Strait into the Atlantic.

In the summer months, sea ice from the Arctic drifts through Fram Strait into the Atlantic. Thanks to meltwater, a stable layer forms around the drifting ice atop the more salty seawater, producing significant effects on biological processes and marine organisms. In turn, this has an effect on when carbon from the atmosphere is absorbed and stored, as a team of researchers led by the Alfred Wegener Institute has now determined with the aid of the FRAM ocean observation system. Their findings have just been published in the journal Nature Communications.

Oceans are one of the largest carbon sinks on our planet, due in part to the biological carbon pump: just below the water’s surface, microorganisms like algae and phytoplankton absorb carbon dioxide from the atmosphere through photosynthesis. When these microorganisms sink to the ocean floor, the carbon they contain can remain isolated from the atmosphere for several thousand years. As experts from the Alfred Wegener Institute, Helmholtz Centre for Polar and Marine Research (AWI), have now discovered, the meltwater from sea-ice floes can delay this process by four months.

From the summer of 2016 to the summer of 2018, the FRAM (Frontiers in Arctic Marine Monitoring) ocean observation system continually gathered data in Fram Strait (between Greenland and Svalbard). Dense clusters of moorings were installed at two sites in the strait in order to monitor as many aspects of the coupled physical-biological processes in the water as possible. Physical, biogeochemical and acoustic sensors throughout the water column and on the ocean floor, as well as devices that gathered water and sediment samples for subsequent laboratory analysis, were used. “For the first time, for two entire years we were able to comprehensively monitor not only the seasonal developments of microalgae and phytoplankton, but also the complete physical, chemical and biological system in which these developments take place,” says Dr. Wilken-Jon von Appen, a climate researcher at the AWI and first author of the study.