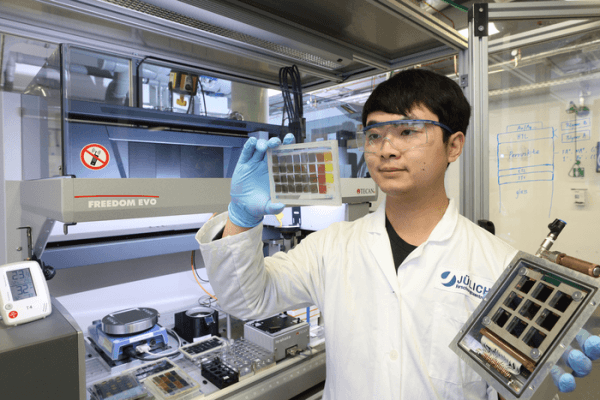 Perovskites are the great hope for further increasing the efficiency of solar modules in the future.

Perovskites are the great hope for further increasing the efficiency of solar modules in the future. Until now, their short service life has been considered the biggest hurdle to their practical use, but this could soon change. In the current issue of the renowned journal Nature Energy, researchers from the Helmholtz Institute Erlangen-Nuremberg of the Forschungszentrum Jülich have presented a variant that stands out for its special stability. In tests at elevated temperature and illumination over 1450 hours of operation, the perovskite-based cell retained 99 percent of its initial efficiency.

A characteristic feature of perovskites is a specific crystal structure. Numerous material combinations of different atoms and molecules are possible, some of which exhibit ferroelectric, superconducting or photovoltaic properties. Although known since the early 19th century, the class of materials was only recently discovered for photovoltaics. Just 10 years of research were needed to raise the efficiency to the level of conventional silicon solar cells at an unprecedented rate.

Compared to silicon crystals, perovskites have several decisive advantages: they can be produced easily, cost-effectively and in an energy-saving manner. The layers of perovskite cells, which are only a few hundred nanometers thick, can also be well applied to conventional silicon cells. While silicon-based technology is already considered mature, such "tandem solar cells" offer new opportunities to further improve the efficiency of solar cells.