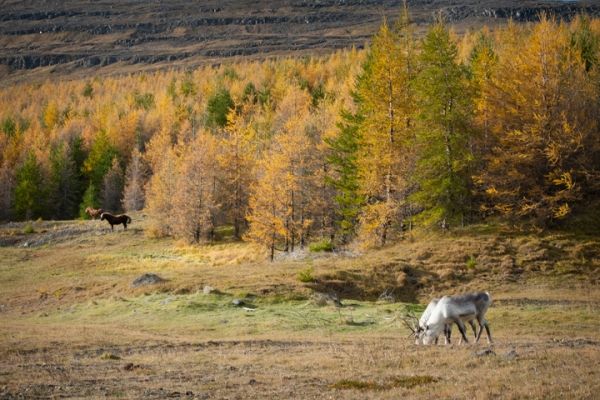 While efforts to raise domesticated reindeer on the island failed, herds of wild reindeer prosper in East Iceland.

Reindeer were first brought by royal decree from Norway to Iceland in the 1700s after diseases had killed about 60 percent of the island’s sheep population. Initially there was hope they could be domesticated and be kept on farms. But early efforts at reindeer husbandry fizzled due to the harsh winters, competition with sheep farmers, and lack of interest among Icelanders in raising the animals.

Nonetheless, wild reindeer thrived in East Iceland, an area with plenty of a key type of lichen (Cetraria islandica) for herds to consume. The population swelled from a few dozen reindeer in the 1700s to more than 5,000 now. Many of Iceland’s reindeer now spend much of their time in the summer foraging in the highlands near Mount Snæfell. When winter weather arrives, they descend into warmer valleys closer to the ocean.