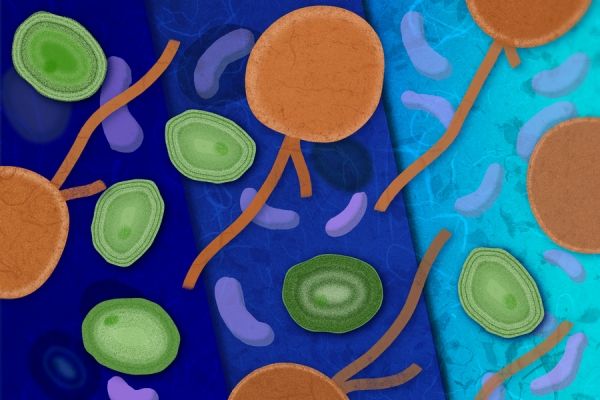 Prochlorococcus are the smallest and most abundant photosynthesizing organisms on the planet.

Prochlorococcus are the smallest and most abundant photosynthesizing organisms on the planet. A single Prochlorococcus cell is dwarfed by a human red blood cell, yet globally the microbes number in the octillions and are responsible for a large fraction of the world’s oxygen production as they turn sunlight into energy.

Prochlorococcus can be found in the ocean’s warm surface waters, and their population drops off dramatically in regions closer to the poles. Scientists have assumed that, as with many marine species, Prochlorococcus’ range is set by temperature: The colder the waters, the less likely the microbes are to live there.

But MIT scientists have found that where the microbe lives is not determined primarily by temperature. While Prochlorococcus populations do drop off in colder waters, it’s a relationship with a shared predator, and not temperature, that sets the microbe’s range. These findings, published today in the Proceedings of the National Academy of Sciences, could help scientists predict how the microbes’ populations will shift with climate change.

“People assume that if the ocean warms up, Prochlorococcus will move poleward. And that may be true, but not for the reason they’re predicting,” says study co-author Stephanie Dutkiewicz, senior research scientist in MIT’s Department of Earth, Atmospheric and Planetary Sciences (EAPS). “So, temperature is a bit of a red herring.”

Image: Where the microbe Prochlorococcus, pictured in green, lives is not determined primarily by temperature, as previously thought. An MIT study finds that a relationship with bacteria, purple, and a shared predator, orange, actually sets the microbe’s range. (Credit: Jose-Luis Olivares, MIT)