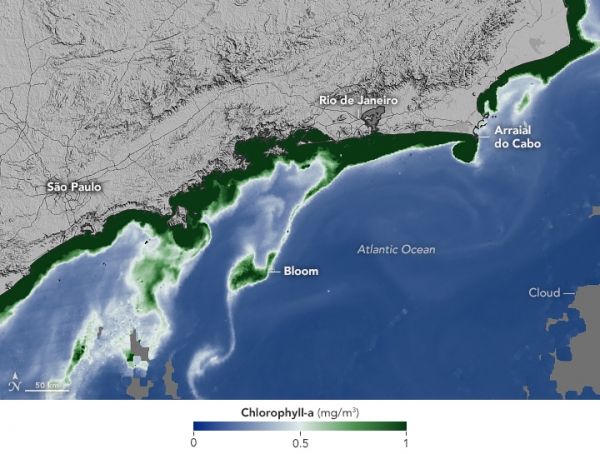 A dark, rainy spring gave way to a vast, long-lived phytoplankton bloom off the coast of Brazil.

Beachgoers in the Brazilian state of Rio de Janeiro contended in late 2021 with unwelcome ocean-dwelling visitors. Starting in November, countless microscopic phytoplankton amassed along the coast, coloring the clear, blue waters a dark, reddish-brown. The bloom—known as a red tide or harmful algal bloom (HAB) event—was unusually widespread and long-lived.

Phytoplankton blooms are common this time of year in Rio, but they typically contain species that are beneficial to the ecosystem. In contrast, harmful algal blooms can show up any time of year, usually spurred by sewage effluents and heat waves; they tend to be small and last no longer than a few days. This red tide event spanned more than 200 kilometers of the coastline and lasted more than eight weeks. “It is very worrying,” said Priscila Lange of the Department of Meteorology, Federal University of Rio de Janeiro.

Some species in a red tide can produce toxins but, so far, those species have not been observed in the Rio bloom. Instead, Lange called the bloom “worrying” because of its likely impact on the marine food web.