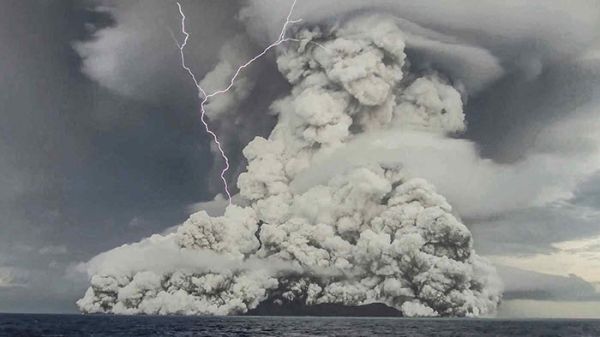 Scientists are traveling to La Reunion to intercept the plume from the Tonga volcano eruption.

On January 15, the Hunga Tonga - Hunga Ha'apai volcano north of Tongatapu in the south west Pacific erupted with ash and sulfur dioxide gas reaching into the stratosphere to altitudes up to or higher than 30 km. It produced excessive lightning and triggered a tsunami, and waves were reported circling the earth multiple times. It is likely the largest volcanic eruption since that of Mount Pinatubo in 1991. Although the radiative impact of this eruption on surface temperature is unlikely to be significant, estimates are that it injected 0.4 teragrams of sulfur dioxide into the stratosphere. This is approximately 2% of the amount that Mount Pinatubo injected into the stratosphere.

This eruption is providing the opportunity to study the microphysical processes that occur when sulfur dioxide gas is emitted into the stratosphere and will help to improve the accuracy of atmospheric models. To take advantage of this rare opportunity, scientists from CIRES / NOAA CSL and the University of Houston are joining with colleagues on La Reunion, an island in the Indian Ocean, to make in situ measurements deployed by balloons that can rise to 30 km.

Observations will be made approximately a week after the eruption, which is the time it takes for the sulfur plume to travel westward ~8000 miles from the volcano location to La Reunion, where balloon launches will occur at the high altitude Maïdo Atmospheric Observatory.