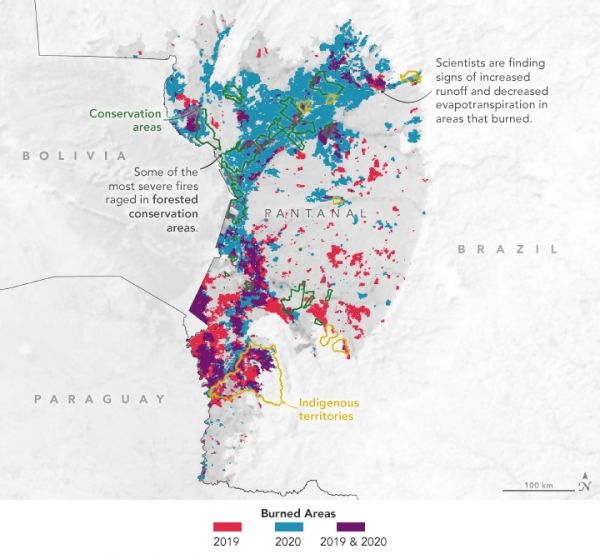 Heat and drought exacerbated fire season in 2020, but cattle grazing and other human activities also primed the region to burn.

One of the world’s largest freshwater wetlands—the Pantanal—spreads across a bowl-shaped plain where Bolivia, Brazil, and Paraguay meet. During the rainy season in most years, floodwater drains from several swollen South American rivers into this vast inland delta, replenishing swamps and marshes. The region is home to thousands of plant and animal species, including rare and endangered jaguars, hyacinth macaws, and giant river otters.

But in both 2019 and 2020, with the region gripped by severe drought, those refreshing floodwaters never came. Come June and July, fires did instead. They burned sporadically at first, but by August and September, they raged with such ferocity that they left vast swaths of the Pantanal blackened. The fires blanketed cities near and far with a pall of smoke. The burning was severe in 2019, charring roughly 16,000 square kilometers (6,200 square miles). But in 2020, the scale was catastrophic, burning one-third of the whole biome. A remarkable 39,000 square kilometers (15,000 square miles) burned in 2020, an area about the size of Switzerland.

In the immediate aftermath of the 2020 fires, the simple explanation for the extensive fires was that unusually dry, hot weather had fueled them. But a new study led by NASA scientists suggests that human activity played a critical role in exacerbating them. The study was published in Scientific Reports in January 2022.