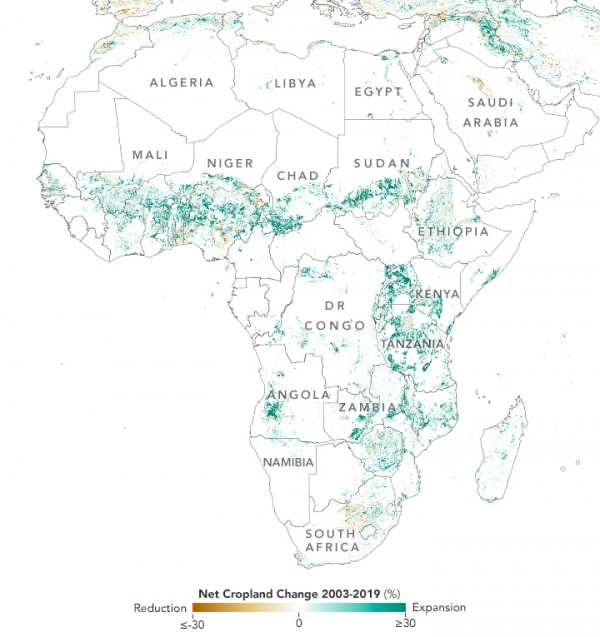 As the population grew, the conversion of natural landscapes into farmland has become common in parts of the continent.

New global maps of cropland from the University of Maryland show that Africa—like South America—has been a hotspot of farmland expansion in the past two decades. In fact, no other continent added as much new farmland. Nearly 79 percent of those new croplands were carved out of natural landscapes rather than pasture or abandoned farmland.

While the rate of cropland expansion slowed in South America over the past two decades, it accelerated in Africa. There was a more than twofold increase from 2016–2019 compared to 2004–2007. As the map above shows, countries in West, Central, and East Africa all saw large increases in cultivated land.

“In Africa, a number of different processes contributed to the changes,” said Peter Potapov, the co-director of the Global Land and Discovery (GLAD) Lab at the University of Maryland. "You have population going up and thus more subsistence farming happening in poorer areas, especially in the Sahel. But in some countries, you also have major foreign investments, especially from China, to establish operations to produce goods for export.”