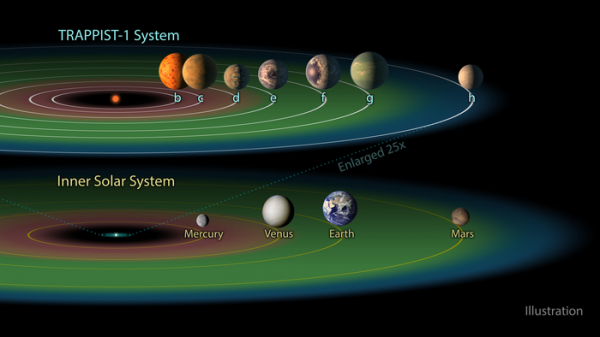 In the past, scientists have focused on planets situated within a star’s habitable zone, where it is neither too hot nor too cold for liquid surface water to exist. However, even within this so-called “Goldilocks zone,” planets can still develop climates inhospitable to life. Sustaining temperate climates also requires a planet have sufficient heat to power a planetary-scale carbon cycle. A key source of this energy is the decay of the radioactive isotopes of uranium, thorium and potassium. This critical heat source can power a rocky exoplanet’s mantle convection, a slow creeping motion of the region between a planet’s core and crust that eventually melts at the surface. Surface volcanic degassing is a primary source of CO2 to the atmosphere, which helps keep a planet warm. Without mantle degassing, planets are unlikely to support temperate, habitable climates like the Earth’s.

“We know these radioactive elements are necessary to regulate climate, but we don’t know how long these elements can do this, because they decay over time,” said Dr. Cayman Unterborn, lead author of an Astrophysical Journal Letters paper about the research. “Also, radioactive elements aren’t distributed evenly throughout the Galaxy, and as planets age, they can run out of heat and degassing will cease. Because planets can have more or less of these elements than the Earth, we wanted to understand how this variation might affect just how long rocky exoplanets can support temperate, Earth-like climates.”

Image: An SwRI-led study suggests that host-star age and radionuclide abundance will help determine both an exoplanet’s history and its current likelihood of being temperate today. For example, the red dwarf star TRAPPIST-1 is home to the largest group of roughly Earth-sized planets ever found in a single stellar system with seven rocky siblings including four in the habitable zone. But at around 8 billion years old, these worlds are roughly 2 billion years older than the most optimistic degassing lifetime predicted by this study and unlikely to support a temperate climate today. (Credit: NASA/JPL-Caltech)