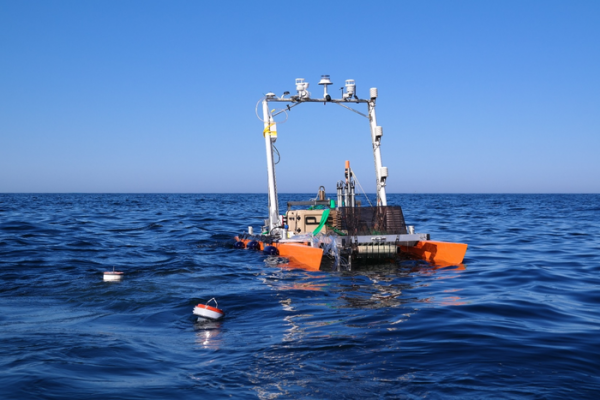 The microlayer between ocean and atmosphere is at the center of a new research group led by Oldenburg scientists.

The microlayer between ocean and atmosphere is at the center of a new research group led by Oldenburg scientists. Over the next four years, the team will study this unique environment where harsh conditions prevail.​​​​

The uppermost layer of the oceans is a very special but as yet little explored part of the planet. Less than a millimetre thick, this surface layer functions like a skin, regulating the exchange of gases, energy and momentum between the ocean and the atmosphere. To study the complex biological, chemical and physical interactions within this "sea-surface microlayer" is the goal of a new research group led by chemical oceanographer Prof. Dr. Oliver Wurl from the University of Oldenburg's Institute for Chemistry and Biology of the Marine Environment (ICBM) in Wilhelmshaven. The German Research Foundation (DFG) and the Austrian Science Fund (FWF) will provide up to 4.1 million euros in funding for the project over the next four years.

"With its approval for this project the DFG once again acknowledges the value of the University of Oldenburg's successful and top-level environmental and marine research," said the University's President Prof. Dr. Ralph Bruder. "The interdisciplinary collaboration led by Oliver Wurl will decisively advance our understanding of the processes in the uppermost ocean layer."

Besides Wurl's research group other researchers at the ICBM are also involved in the DFG Research Unit, which is titled Biogeochemical Processes and Air-Sea Exchange in the Sea-Surface Microlayer (BASS). Project partners from the GEOMAR Helmholtz Centre for Ocean Research Kiel, the Helmholtz-Zentrum hereon in Geesthacht, the Universities of Kiel, Hamburg and Vienna (Austria) and the Leibniz Institute for Tropospheric Research in Leipzig will also take part in the research.

Read more at University of Oldenburg

Image: The new autonomous research catamaran is able to take samples and to measure the exchange of gases, energy and momentum between ocean and atmosphere. Here, it can be seen on its first mission in the North Sea in early May. The two measuring buoys in the foreground are passively drifting with the ocean currents and collect data in the process. (Credit: University of Oldenburg/Lisa Gassen)