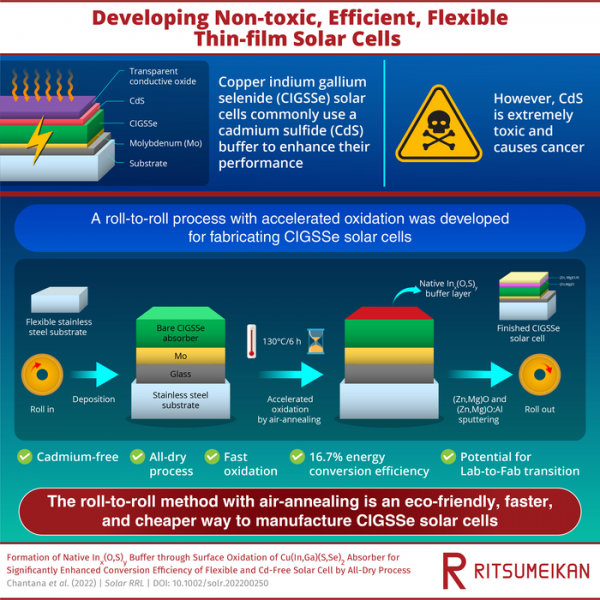 Climate change, one of the major global concerns today, has made it clear that fossil fuels are detrimental to our environment and are not sustainable. It is imperative to adopt clean sources of energy, and solar cells are a popular candidate on this front. While efficiency is a primary concern for solar cells, researchers have also focused on developing solar cells that are lightweight, low-cost, and flexible. However, the fabrication process itself has posed a serious environmental concern: the use of toxic materials and generation of industrial waste.

For instance, copper indium gallium selenide (CIGSe) is a thin-film solar cell that offers several advantages over traditional silicon solar cells. Thin-film solar cells are about 100 times thinner, cheaper to make, and are easier to install on rooftops and vehicles. Moreover, compared to other photovoltaic materials used in thin-film solar cells like amorphous silicon, cadmium-telluride, and organic materials, CIGSe absorbs light more strongly and can be prepared into thinner films. However, they contain a buffer layer of cadmium sulfide, which is highly toxic and carcinogenic. This makes finding alternative, non-toxic materials essential for large-scale production and installation of CIGSe panels.