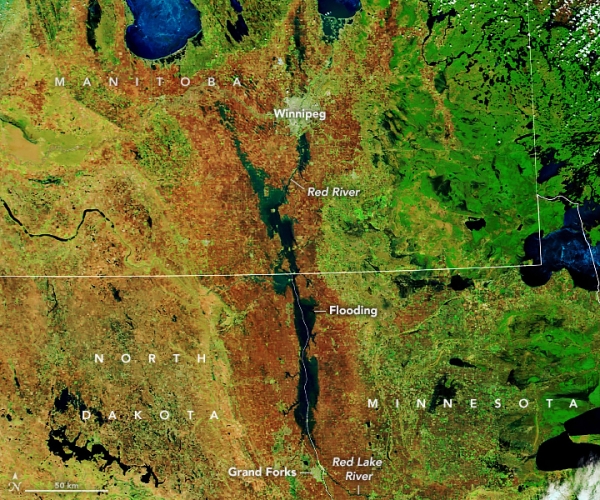 A blizzard, multiple rainstorms, and melting winter ice swelled rivers out of their banks and across a flat floodplain in Minnesota, North Dakota, and Manitoba.

The Red River Valley in Minnesota, North Dakota, and Manitoba is facing some of its worst flooding in a decade. An extreme spring blizzard, multiple rainstorms, and melting winter ice swelled the Red River of the North and its tributaries, driving them out of their banks and across a broad, flat floodplain. The deluge comes one year after the same region endured extreme drought.

The false-color images above were acquired with the Moderate Resolution Imaging Spectroradiometer (MODIS) instruments on NASA’s Terra and Aqua satellites. The first image shows the flooded valley as observed by Terra on May 10, 2022; Aqua acquired the second image on May 11, 2020, under more typical spring conditions. The images combine shortwave infrared and visible light (MODIS bands 7-2-1) to better distinguish river water out of its banks.

According to the U.S. National Weather Service, the water level on the Red River at Pembina, North Dakota (near the U.S.–Canada border) crested at 52.27 feet on May 8; flood stage there is 39 feet. The Red River has mostly been dropping at Grand Forks, after cresting just below major flood stage last week. The Red River remained in major flood stage at Oslo, Minnesota: river gauges measured 36.09 feet on May 11, while flood stage is 26 feet. According to news reports, water managers in northeast North Dakota remain concerned about the 65-year-old Bourbanis Dam, which has been battered by weeks of high water.