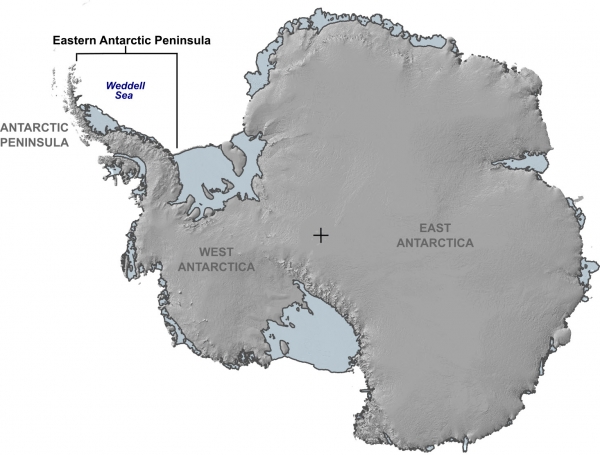 Despite the rapid melting of ice in many parts of Antarctica during the second half of the 20th century, researchers have found that the floating ice shelves which skirt the eastern Antarctic Peninsula have undergone sustained advance over the past 20 years.

Ice shelves – floating sections of ice that are attached to land-based ice sheets – serve the vital purpose of buttressing against the uncontrolled release of inland ice to the ocean. During the late 20th century, high levels of warming in the eastern Antarctic Peninsula led to the catastrophic collapse of the Larsen A and B ice shelves in 1995 and 2002, respectively. These events drove the acceleration of ice towards the ocean, ultimately accelerating the Antarctic Peninsula’s contribution to sea-level rise.

Currently, the jury is out on exactly how sea ice around Antarctica will evolve in response to climate change, and therefore influence sea level rise, with some models forecasting wholescale sea ice loss in the Southern Ocean, while others predict sea ice gain.

Now, an international team of researchers, from the Universities of Cambridge and Newcastle in the UK, and the University of Canterbury in New Zealand, have used a combination of historical satellite measurements, along with ocean and atmosphere records, to get the most detailed understanding yet of how ice conditions are changing along the 1,400-kilometre-long eastern Antarctic Peninsula.