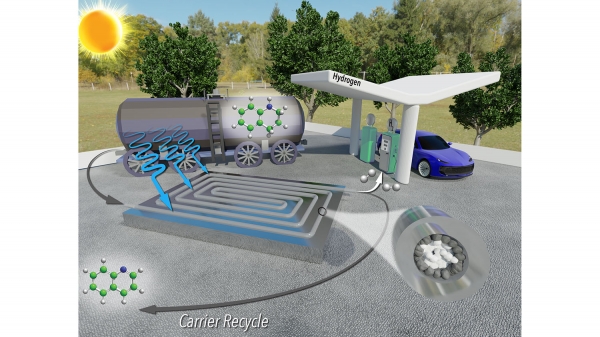 Researchers from North Carolina State University have developed a new technique for extracting hydrogen gas from liquid carriers which is faster, less expensive and more energy efficient than previous approaches.

“Hydrogen is widely viewed as a sustainable energy source for transportation, but there are some technical obstacles that need to be overcome before it can be viewed as a practical alternative to existing technologies,” says Milad Abolhasani, corresponding author of a paper on the new technique and an associate professor of chemical and biomolecular engineering at NC State. “One of the big obstacles to the adoption of a hydrogen economy is the cost of storage and transportation.”

Hydrogen fuel does not result in CO2 emissions. And hydrogen refueling stations could be located at existing gas stations, taking advantage of existing infrastructure. But transporting hydrogen gas is dangerous, so hydrogen needs to be transported via a liquid carrier. A key obstacle for this strategy is that extracting hydrogen from the liquid carrier at destination sites, such as fueling stations, is energy intensive and expensive.

“Previous research has shown that it is possible to use photocatalysts to release hydrogen gas from a liquid carrier using only sunlight,” Abolhasani says. “However, existing techniques for doing this were laborious, time consuming and required a significant amount of rhodium – a metal that is very expensive.”