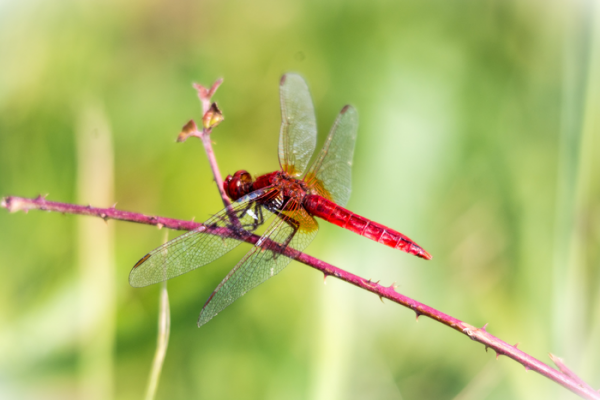 Sparse data often make it difficult to track how climate change is affecting populations of insect species. A new study by the Technical University of Munich (TUM) and the German Centre for Integrative Biodiversity Research (iDiv) has now evaluated an extensive species mapping database (Artenschutzkartierung, ASK) organized by the Bavarian State Office for the Environment (LfU) and assessed the population trends of butterflies, dragonflies and grasshoppers in Bavaria since 1980. The main finding: heat-loving species have been increasing.

Climate change has long since been happening in central Europe, and it is no secret that it affects the populations and distribution of animals and plants. Especially insect trends are a growing cause for concern, as multiple studies have shown their declines. How populations of our insect species are changing over past decades is a question explored by the BioChange Lab at TUM. “It is not only the climate that is changing, but also the type and intensity of land use. This includes agriculture, forestry, urban areas, and transport infrastructure” says Dr. Christian Hof, head of the BioChange research group at TUM.

While changes in flora and fauna may be well-documented in certain areas or for specific species, data for insects and most importantly over prolonged time periods is very sparse. This makes it difficult to draw general conclusions about the changes in populations of insect species and the factors driving biodiversity change. Yet it is precisely findings on species population changes over time, together with factors such as land use and the climate, that informs conservation plans for protecting species, biotopes and the climate.

Image: The scarlet dragonfly (Crocothemis erythraea) is one of the best-known beneficiaries of global warming. The dragonfly, most common in the Mediterranean region, first appeared in Bavaria in the early 1990s and is now widespread. (Credit: E.K. Engelhardt / TUM)